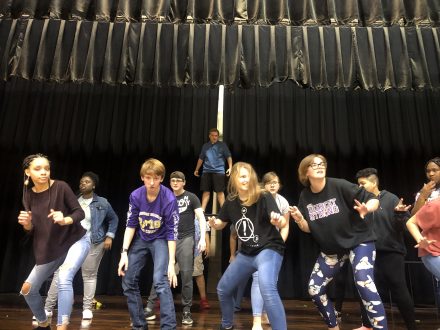 Drama director, Leigh Powell selected the production Lion King Jr. because it had a lot of younger roles. At the time of selection, Powell had envisioned collaborating with the middle school in hopes of drawing more students into drama. She got exactly the reaction she was hoping for, as 15 students have joined in the production.

“I really just wanted to build awareness and draw attraction, because drama is still a fairly new program at the school and a lot of kids coming from the middle school don’t know about it,” Powell said.

Although this is the first time many of them have been onstage, Powell said the kids are excellent and some of them have leading roles.

Simba is being played by JaQuan Freeman, who is new to drama, but Powell said this role is really exciting to him and he has really immersed himself into character. Kaitlin Floyd is playing the role of Rafiki, while another newcomer, John Sykes plays the role of Mufasa.

The duo of Timon and Pumbaa is being played by veteran actor, Micah Langdon and Dominick Rosario.

Powell said everyone has really stayed true to character and has been rehearsing three times a week.

“They genuinely love the show and have dedicated themselves to putting on a great performance,” she said.

Powell said she could not have made this production without the help of co-director and technical director, Chris Poppell and hopes everyone comes out to see it.

Deputy Sheriff earns prestigious awards before being sworn in