Violin-piano duo to perform at Kirbo Center next weekend 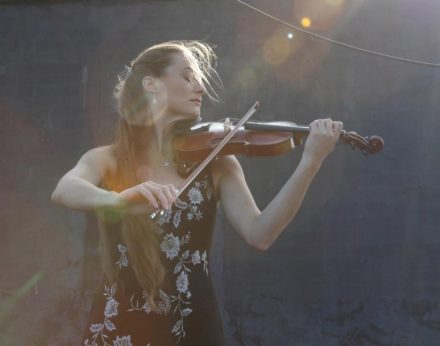 Violinist Claudia Schaer will be performing a variety of works with pianist Olga Gurevich next Sunday, Feb. 16, at the Firehouse Arts Center.

Bainbridge Firehouse Arts Center has a special treat in store for classical music lovers on Sunday, Feb. 16, at 2.30p.m. Award-winning Canadian violinist Claudia Schaer will be performing a variety of classical and romantic works for violin, along with pianist Olga Gurevich.

Claudia’s thematic program is appropriately titled “A Delicious Program” that according to Ms. Schaer will feature an imaginative array of virtuosic gems for the violin. Selections will include works by Rachmaninov, Brahms, Faure, Mozart, Kreisler, Boulanger and much more.

A Native of Calgary, Canada, Claudia Schaer was 11 when she received the “Most Promising Violinist” medal at the Canadian “Kiwanis Music Festival”, and she won prizes in international competitions thereafter. A graduate of the Juilliard School’s Accelerated Bachelor/Master program, she served as concertmaster of the Juilliard Symphony, and as teaching assistant to her mentor, Sally Thomas, as well as receiving the “Sasakawa Young Leaders’ Fellowship”.

Pianist Olga Gurevich’s career spans the disciplines of concert artist, chamber musician, accompanist, and pedagogue. Her performances have been broadcast by National Television in Azerbaijan, First TV Channel in Russia and RAI Tre in Italy, and her concert appearances include venues such as Carnegie Hall, Weill Recital Hall, Symphony Space, the 92nd Street Y, Scuola Civica in Cagliari (Italy), Smirna Opera Theatre in Delaware, Westport Concert Series in Connecticut, and many others.  She has studied in Moscow, Russia, finishing post-graduate studies at the Maimonides State Academy and earning her Master’s Degree at the Gnesin Academy, in Piano Performance, Piano Accompanying and Piano Pedagogy. As a pedagogue, she is a Steinway Hall teacher and a faculty- member at the Bloomingdale School of Music in NYC, as well as enjoying a extensive private piano studio.

The concert will be held in the Kirbo Center and admission is free, made possible thru the Edward T. Fogg and Lisabeth Fogg Charitable Trust.