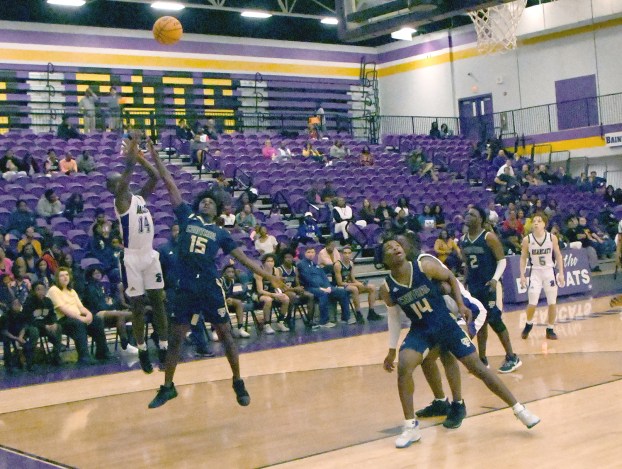 It got loud Tuesday night at the Bainbridge Gym as the Bearcats (15-11) and the Lady Cats (12-14) downed the Thomas County Central Yellow Jackets in the region play-in games.

The wins for Bainbridge secured a spot in the region tournament for both teams.

In the Bearcats’ 66-43 win over the Yellow Jackets, Dorrian Cooper and Mark Taylor each scored 13 points. Cooper was sharp from downtown, going 3-of-4 from the 3-point line. Taylor had a double-double for the night, totaling 11 rebounds to complement his high-scoring performance.

K.J. Cochran was also in double figures with 10 points and 5 total rebounds. Other scorers for the Bearcats were Lathan Levens and Tyrell Bryant with 9 points each, Alvanni Williams with 5 points, Dewayne Kyles with 4 points, Braxton Johnson with 2 points and Dontae Broadnax with 1 point.
Bainbridge remained neck-and-neck with the Yellow Jackets in the first quarter with an 11-11 score, but pulled away for good in the second quarter as they added 26 points and another 29 points total in the second half.

The Lady Cats had a similar game, with a low-scoring 9-5 lead after the first quarter, followed by an explosion of points. Bainbridge put up 12 points in the second quarter, 17 points in the third and 18 points in the fourth.

Detavia Salter led the team with a double-double, pouring in 18 points and snagging 13 rebounds in the win. Denise Chappell had 12 points and 6 total rebounds. Other scorers for the Lady Cats were Taralyn Brown with 8 points, India Parris with 6 points, Kirston Noble and Taniah Register with 4 points each and Destiny Turner and Marquita Jakes with 2 points each.

Bainbridge took on Veterans, who leads Region 1-AAAAA, Friday night in Kathleen for the first round of the region tournament.

Kyle Shanahan called for the 49ers to run the football 22 times Sunday night. Shanahan was calling plays for the... read more