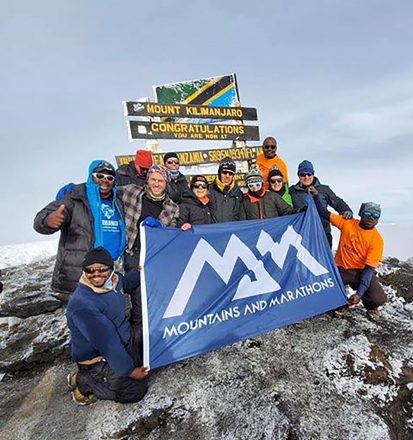 Daniel Walker smiles with his leadership class at the top of Mt. Kilimanjaro on January 21, 2020.

Bainbridge native Daniel Walker, class of 1998, had a rough go of it in 2019. Despite his troubles, Walker found an outlet where he was able to find joy in life again and reflect on the special times he spent with family and close friends.

Walker faced significant troubles in 2019. At the beginning of the year, he lost his grandmother and his father was diagnosed with his 10th bout of cancer.

However, with this news came something positive, Walker’s then girlfriend and soon to be fiancé was pregnant. Walker was excited to begin building a life with her, when he found out his father’s cancer had been diagnosed as terminal.  Although Walker was devastated, he continued to push forward with his plans and try to be a great soon-to-be father himself. Unfortunately, Walker’s girlfriend suffered a miscarriage and could no longer see herself in the relationship.

“Depression set in and I was no longer myself,” Walker said. “I gained a lot of weight, started drinking more often than ever before and my health, business and emotional well being took a hard hit during this time.”

Although Walker was still depressed, he was continuing to visit his father every week in Cairo, who was in the care of home hospice.

“He was my best friend and confidant in life,” Walker said. “He was the only person in my life that I could come to when life was difficult, brag to when life was shining and tell my intimate secrets to without passing judgment.”

Walker’s friends worried all of this may be too much on him, but Walker continued life as normal, until he saw a Facebook advertisement on August 8, several days after his father’s death. The advertisement was for a group called Mountains and Marathons, a leadership program that finalized with a climb of Mt. Kilimanjaro.

Less than 24 hours after seeing the ad, Walker joined the leadership group. It couldn’t have come at a better time, as Walker’s lifelong friend, Joey passed away a few months later. The program began a week before Walker could begin, but the organizers understood Walker’s recent hardships and wanted to make sure he could get past everything.

Walker began practicing a whole food plant-based diet, long training sessions and running long distances. He also completed weekly leadership trainings and emotional strength exercises. He said he felt strong, healthy and focused, but didn’t realize the sadness of loss he was still carrying with him, until the holidays appeared.

“With the holidays came the release of all those penned up emotions,” Walker said. “I was going down and going down fast, but I kept telling myself the journey was only a couple weeks away.”

On January 15, 2020, Walker set off for Tanzania to climb Mt. Kilimanjaro. He said he did not have any expectations; he was going off the grid with no electronics or communications to the outside world.

“This terrified me, but I had a feeling it was much needed,” he said.

The mountain consisted of five different landscapes and challenged the participants both mentally and physically. But, those challenges changed Walker for the better.

He was able to release the built up emotions from all his losses.

Walker also said this time also brought him closer to God, and it showed him that there is hope and the sun will rise again.

Since the trip, Walker has decided to spend as much time seeing the world as possible and really donating his time to people that need it. And for those who think they need a change in their life as well, or are facing a dark time, he encourages a challenge.

“Do something challenging both physically, mentally and emotionally,” he said. “Fight through it.”

Walker never thought he could or would face the challenge of climbing the highest mountain in Africa and the third highest climbable mountain on Earth, but he knows his dad would be so proud, and that’s all he wants.

Walker wants everyone to know that he has felt their struggle and is a supporting hand if anyone ever needs it, and lastly encourages everyone to live like there is no tomorrow.