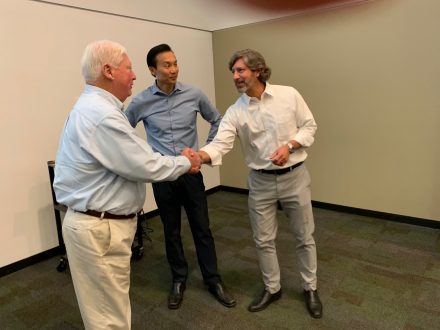 Rotarians heard an update this week on the hometown venture, Danimer Scientific, from Michael Smith, chief operating officer.  Smith reinforced the designation of the company being a local venture, as it originated in Bainbridge in 2004 and boasts John Dowdy, Dick Ivey and Greg Calhoun, all residents of Decatur County as active board members. Michael Smith also is a native of Bainbridge, as well as Scott Tuten, chief marketing officer, and John Dowdy III, the financial officer.

It is a hometown business that has grown and expanded greatly in sixteen years.

The Bainbridge plant employs 84, while the Kentucky plant currently has 61 employees.

So, what does Danimer make? They work with biodegradable PHA, using micro organisms that break down plastic, and PLA, that makes materials other manufacturers, such as Pepsico buy to produce packaging that is biodegradable.

In 2007 Danimer purchased the BHA intellectual property from Proctor and Gamble of Cincinnati.

One of the items made from the PHA is a straw produced by several companies that is totally biodegradable.

Those straws break down and disintegrate quickly. Smith said if you throw one of these biodegradable straws in your back yard the bacteria will begin eating it and it will be gone. The same goes for biodegradable wipes disposed of in a septic tank. “They will be gone in seven days,” he predicts.

The product is completely renewable. It is very useful in food packaging products.

Smith said Danimer is recognized as a leader in the field of biotechnology and bioplastics. There is one company in Japan that doesn’t even come close, according to Smith. “The market is staggering. The world needs this product,” stated Smith.

He is very excited about the acquisition of the plant in Winchester and the customers who are buying at that plant. He noted that there are several other customers and pending contracts they are not at liberty to name yet.

For more information about the company, visit www.danimerscientific.com