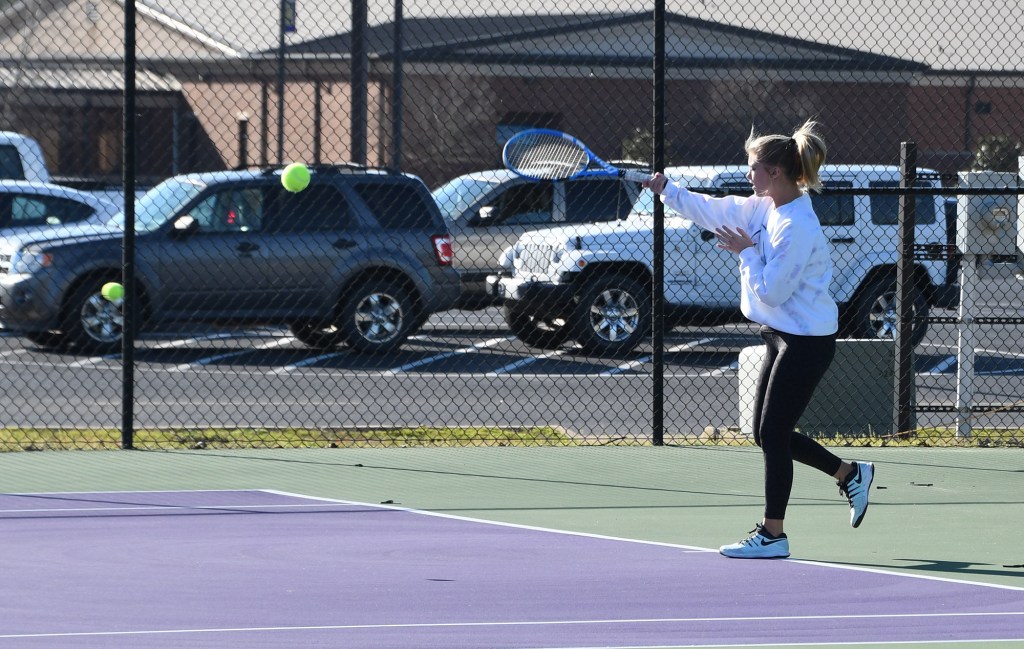 Senior Mikey Harrell warms up with Gracie Surratt at practice on Tuesday afternoon.

With a region championship under their belt and a final four run in 2019, the Bearcat and Lady Cats tennis teams are ready to serve up some competition this season, especially on their new and improved courts.

The Lady Cats have five returning seniors, Piper Harrell, Sarah Caroline Darley, Ashley Kate Barber, Gracie Surratt and Mikey Harrell, who are all anticipating a great season.
The girls believe they are destined to be region champions again because of the team’s bond and hard work.

“I’m really excited because of the effort that every single person on this team has put in,” Surratt said. “This is the hardest we’ve ever worked in pre-season practice.”

Although the team has been working hard, they know they still have some tough region competitors ahead of them. Surratt said she thinks TCC will be the toughest in the region.

“There’s a lot of rivalry between us,” Surratt said.

“But, we always shut it down,” Barber chimed in.

Head Coach Amy Thomas agreed, noting that TCC has always been a tough competition for the team, but she’s also not counting out Harris County or Veterans.

The team is already looking to the future, though. They want to take home another region championship and go even further in the final four competition.

Surratt agreed, and said they have poured everything they’ve got into this season in order to make sure their senior year on the courts is a memorable one.

While this may be their last year, the seniors all agreed that they are passing on a legacy to a talented group of girls, whom they know will continue to take them far in years to come. In addition to the talent the seniors have seen in the group below them, they’ve also developed a bond that will help them on and off the court. They have already prepared a slumber party before the Bearcat Brawl on February 7.

The Bearcats have three seniors and a lot of fresh talent, Thomas said. However, this year Xavier Bell is dedicating his time to solely coach and concentrate on the boys’ team.

“They have tremendous potential this year,” Thomas said.

Bell agreed, saying they have a great chance of taking the region, although the team is young.

Bell noted the team still has some fierce competition, especially with Harris County.
Robert Bryan Shockley is especially excited about some of his new teammates, and thinks they look fierce on the court.

“I’m especially excited to see doubles play,” he said. “I think we have a guaranteed win in doubles every time.”

While both teams are excited for the season to start, they are also looking forward to playing on their new courts. The new courts sport the Bearcat purple and are a major upgrade to the facility.

“It feels like we are Wimbledon now,” Surratt said.

Shockley was also thrilled with the change, saying the colors will take some getting used to, but he is happy he doesn’t have to worry about slipping any longer.

If the facilities upgrade is complete, the Bearcat Brawl will take place at BHS the weekend of Feb. 7-8. If the upgrades are not complete, Thomas said they may play at the recreation center.

Regardless of where they play, Thomas invites everyone to come out and support the team and get ready for a season of great play.