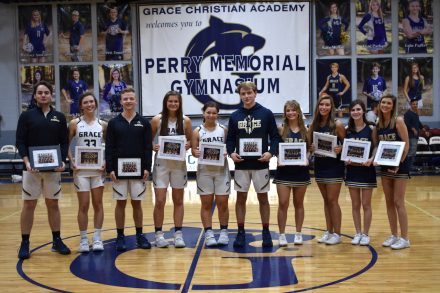 Grace Christian Academy senior night was one for the books.

Friday night, the Cougars and Lady Cougars basketball team faced off against North Florida Christian, where the Lady Cougars made a last minute shot, giving them the win.

Lainey McRae was fouled with two seconds left in the game and the Lady Cougars down by one. Lainey made both free throws and won the region game 44-43.

Lainey and sister, Kate McRae both started off the first quarter scoring two points, along with teammate Emellia Woodrum. Caroline Wells began with one point, but showed out in the second quarter, scoring five points.

Lainey made two free throws in the second quarter, while Woodrum hit a three pointer and Kate scored four points.

The senior girls were excited for such a close and well fought region game on their senior night.

The Cougars and Lady Cougars will host the region tournament next week at ABAC.

The entire school is looking forward to hosting this tournament, knowing what an honor it is for the school and the community.

Semifinals will be played on Thursday, February 6, with the region championship on Friday, February 7, or a consolation game if needed.

Times have not yet been announced, nor have seedings, but will be available in the coming week.