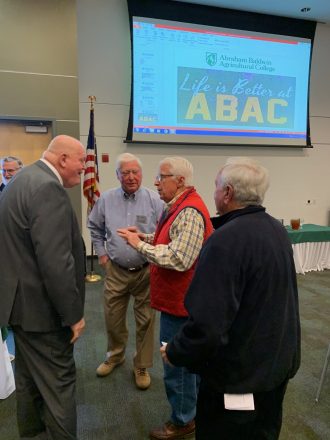 Dr. David Bridges has been president of ABAC since 2006. He spoke to the Bainbridge Rotary Club this week about the ABAC, it’s history, its goal, challenges and the future of the learning institution. He was accompanied to the meeting by Lori Haddock, Director of the Blakely campus, who incidentally, is also the president of the Blakely Rotary Club.

Bridges began his talk speaking of some of the factors influencing the declining enrollment being seen.  One of those is what he deemed a real disparity between rural and urban students, who know little about agriculture, or even where their food comes from.

He spoke of school efforts to inform students about the sources of their food products, promoting the growers in the cafeteria.

Surprisingly, he also listed dual enrollment as a factor that has dramatically changed the average student enrolling in college as a freshman. “Now, almost without exception a freshman shows up for the first year in college with an accumulation of college credit hours. He predicted there will be changes coming in that field that may have a negative impact; but the total number of college credit hours a dual enrollment student will be allowed as a freshman will be limited.

Also impacting enrollment is the many options being offered by the technology systems. “All of this adds up to a challenge from what we knew in the past,”explained Bridges.

He told that the site for ABAC in Tifton was determined in 1906 and the doors in Tifton, Ga. opened in 1911, providing enhanced opportunities for education of students in rural areas. ABAC was opened as an agricultural school to offer workforce related programs in agricultural and natural resources fields for South Georgia students.

The vision is now expanding as the school now offers four-year degrees in those programs as well as a Bachelor’s in Business. Currently there are 65 students working toward a BS in Business, and 31 graduated since 2016.

The college’s ultimate goal is to produce people ready to go to work. To help expedite this students are to do an internship with a company, preferably in a rural area, where they can take the theory of what they learn and put it to work.

Along with this is the nursing school. With 340 seats in the School of Nursing, 60 of them at Bainbridge, the nursing program has seen a 99 percent pass rate, with Bainbridge having the highest in South Georgia for the last three years. He stated that 80 percent of ABAC nursing graduates work in South Georgia, where there is a large demand.

Sharing some plans for the future, Bridges said they are creating a Department of Education, offering upper level education in such subjects as biology, history and government, English and Communication, and working with agreements with medical and pharmacy schools.

Bridges spoke about the number of ABAC alumni that have gone on to work in other places, including foreign countries. He recalled an incident when he was visiting Germany three years ago. He was walking down the street wearing his ABAC slicker and hat when a fellow stopped him and said his cousin had gone to ABAC.