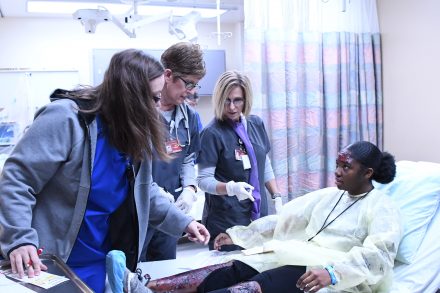 Decatur- Grady 911 toned the drill out at 10 a.m.. The 911 call reported a railcar derailment and chlorine spill at the Bainbridge Town Center strip mall. Shortly after the call, emergency responders arrived on scene, where they found approximately 15 students from the Heath Care program at Bainbridge High School acting out injuries. The students were realistically portraying a variety of arm, head and leg injuries, along with burns.

Officers, firefighters and EMS technicians immediately contained the scene, before firefighters suited up in hazmat suits and approached the students to assess the severity of the injuries.

Upon assessment, the student victims were triaged and given a paper that told of the severity of their wounds, while several were deemed causalities.

One by one, firefighters took the student victims to the decontamination area they had set up in the parking lot. Fire chief, Doyle Welch described the area as a “mass carwash,” where they scrubbed the victims free of chlorine before putting them in a gown and footies to rid them of the toxic fumes.

The students were then put in an ambulance and transported to the Memorial Hospital Emergency Room.

Welch did note that during the drill there were not enough ambulances, so some of the student victims rode in the school bus. During a real event, Welch said they would set up a massive tent in the parking lot and begin assessing patients there if necessary.

Upon arriving at the ER, medical staff was at the ready and waiting to treat the Code Yellow patients. They were treated for a variety of ailments including chemical burns, respiratory distress, cuts, bruises, fractures and heart failure. The victims deemed casualties were taken to the makeshift hospital morgue.

Welch was really proud of how the hospital and emergency responders worked together to make this drill a success. This drill allowed for everyone to complete the mandatory training in mass casualty events.