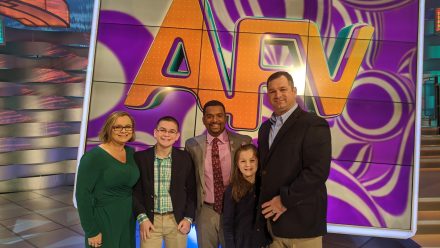 An upcoming episode of America’s Funniest Home Videos will feature a submission by Bainbridge native Hugh Griffin and his family. The clip, features Hugh, his 13-year-old son Tyler, 9-year-old daughter Anna Jane, their English Bulldog, Lugnut, and a set of icy porch steps.

The clip was captured by the family’s Ring doorbell camera, and was submitted in November by Hugh’s wife, Kristy.

The family was notified in early December that their clip was chosen as a finalist for an upcoming episode. They were flown to Los Angeles in late December for filming. The results of the voting won’t be disclosed until the episode airs on Sunday, Feb. 16.

The Griffins currently reside in Eagle River, Alaska. Hugh recently retired after serving 20-plus years in the U.S. Army, and is working as a Business Opportunity Specialist with the US Small Business Administration office in Anchorage. Kristy is employed by the US Air Force as the Fort Richardson Youth Programs Director on Joint Base Elmendorf-Richardson, AK.

Hospital in better shape than this time last year