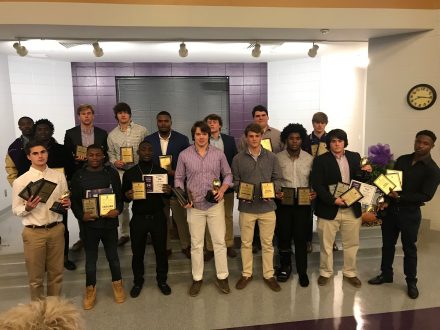 Bainbridge football players proudly display their awards at the 2019 season banquet this week.

The Bainbridge football team celebrated its 7-4 season on Thursday at the Bainbridge Cafeteria, where players were recognized for their performances and achievements throughout 2019.

The academic award, given to the highest cumulative GPA in each class, was handed to freshman Jebson Logue, sophomore Pierce Taunton, junior Jaylon Randall and senior Garrett Sigman.

The Hard Hat Award, given to players who performed at a high level during practice or games with a great attitude and work ethic, was given to Tevin McCray, Amari Peterson, Michael Ryan, Braxton Johnson, Lawson Chandler, Tahari Tate, Quayde Hawkins, Jackson Wheeler and Rashad Broadnax.

The Iron Man Award is given to players who contributed to all three phases of the game—offense, defense and special teams. Monteric Robertson and Caleb Lewis were this year’s recipients of the award.

Simpson Bowles was this year’s recipient of the Tommy Smith Hustle Award, an award given to a player who demonstrates the same qualities of character, leadership, academic achievement and hustle of Thomas Livingston Smith, Jr.