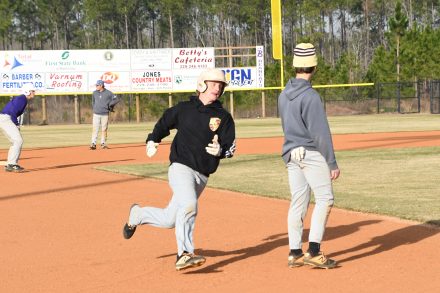 Senior Sam Boutwell rounds third base during a drill at the Bainbridge High School baseball field on Wednesday.

Bainbridge baseball coach Donnie Coxwell is excited about where the team is right now during preseason practice.

“We are working hard and we’re ready to go,” said Coxwell.

The current roster is comprised of 17 players, one of which is Braxton Johnson, who is also playing basketball for the Bearcats. From what Coxwell has already seen from the squad through the preseason practice schedule, there is no doubt in his mind that they can achieve their biggest goal: win a region championship.

To help them get to that point, Coxwell is repeating a couple of mottos during practices.

“Good is the enemy of great,” said Coxwell, “and Mudita, an old Buddhist word that means take joy in the success of others. We have some guys that can play. We are having a lot of competition, but we can only play nine, so if that guy is not playing that day or that week, he still has to be rooting for our team, because if the team succeeds, then everybody succeeds. We want everybody on the same page.”

One of Bainbridge’s staples during the season will be an intersquad scrimmage every Friday, where coaches put players in certain positions and situations to see how they respond. For example, Coxwell gave every batter a 1-2 count last Friday. This week, he gave them all 2-0 counts.

The idea is to put pressure on the players during practice so they are used to it by game time.

In terms of leadership, Coxwell is impressed by how accountable his players are showing themselves to be. Rather than waiting for coaches to correct their errors, the players take in themselves. During batting practice, hitting a fly ball means five pushups. The other players make sure they are doing them, not the coaches.

Just about every player on the roster will be playing multiple positions, according to Coxwell. Because a lot of them also will be used for pitching, the roster will see a lot of rotation throughout the season.

“Everybody is playing two positions, and some are even playing three positions,” said Coxwell. “It’s going to be next man up. Who is competing? Who is performing? They are going to play. If they are not that guy, they have to keep working hard and become that guy. They are buying in to what we’re doing.”

Kaleb Varnum, Dewie Brock and Nolan Barr will be returning to the mound this season, with newcomers like Jackson McCullough and Quayde Hawkins practicing on the bump as well. Big hitters like Sam Boutwell, Mike Conder and Jace Godwin are also expected to produce at the plate, said Coxwell.

“We got a bunch of juniors that can play,” said Coxwell. “We are hoping they’ll take the seniors places next year and the sophomores will take the juniors place.”

Harris County is expected to win Region 1-AAAAA this season, with TCC, Warner Robins and Veterans all fighting for high placements as well. For the Bearcats, it’s all the more reason to come out swinging for the fences and take the region title.

“If we don’t do that, we won’t be satisfied,” said Coxwell.

Bainbridge opens its season on Tuesday, Feb. 11, against Lee County at home.