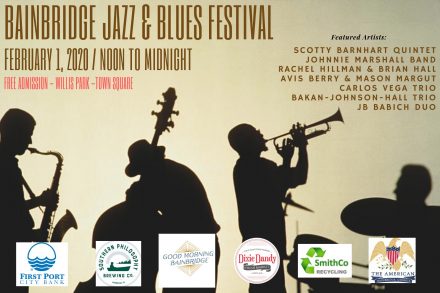 Southern Philosophy Brewing and The American restaurant have teamed up to provide a free music festival on Saturday, February 1 that will feature seven jazz and blues acts from across the South.

Heather and Tyler Thomas of The American and Nicole and Gallagher Dempsey of Southern Philosophy Brewing both saw what the other brought to the community and decided to collaborate and bring a new event downtown.

“I thought it would be awesome to have a cold weather event,” Gallagher said. “There’s usually a great chance it’ll be a beautiful day and jazz and blues just go with the cold weather.”

Once agreeing to tackle the exciting, new event together, Gallagher and friend, John Daniel set out to find music artists to feature at the festival.

“We tried to get people from outside the area, although most are from Tallahassee,” Gallagher said.

Some of the biggest names that will hit the main stage at the festival are the Scotty Barnhart Quintet and the Johnnie Marshall Band.

Scotty Barnhart is an acclaimed jazz trumpeter who has played with the legendary Count Basie Orchestra as a featured soloist and has served as director of the Basie Orchestra. In addition, he is also a two-time Grammy Award winner.

The Johnnie Marshall Band is headlined by Johnnie Marshall, an electric blues guitarist, singer and songwriter, who was born in Whigham. He’s toured all across the US and in Europe and will be bringing some high-energy music to his hometown.

“The talent that’s going to be here is premium,” Tyler said.

Heather, Tyler, Gallagher and Nicole know that getting this talent to the festival wouldn’t have been possible without the help of their sponsors.

They are thankful to First Port City Bank, Good Morning Bainbridge, Dixie Dandy and SmithCo. Recycling for helping make this a success.

The event will be rain or shine and include indoor and outdoor concerts, with both a beer and wine booth outside, along with specials throughout the day at both restaurants.

The festival will begin at noon and the first band will begin at 12:15 p.m. at Southern Philosophy Brewing. BAM! Avis Berry, Mason Margut and Brian Hall will play until 2:15 p.m., before the Carlos Vega Trio begins playing at The American at 2:30 p.m.

The Scotty Barnhart Quintet will hit the main stage at 4:30 p.m. that is located under the large oak tree in Willis Park and play until 6 p.m. followed by the Bakan-Johnson-Hall Trio at the American at 6:15 p.m. and the JB Babich Duo at Southern Philosophy at 6:15 p.m.

Guests can return to the main stage at 8:30 p.m. for the Johnnie Marshall Band and end the night at Southern Philosophy at 10:15 p.m. with Rachel Hillman/Brian Hall.

Heather, Tyler, Nicole and Gallagher are thrilled already with the response. They said almost 1,000 people have said they are attending or thinking about attending on Facebook and other social media sites, which exceeds all their expectations. They were hoping to see between 700-800 people.

They would love to make this an annual event if everything goes off without a hitch. They have had great support of the City and other local merchants, including Reeves, who plans to stay open later for guests who may want to shop and listen to music.

“This is something great for the community,” Heather said. “It gives locals something to do and continues to make Bainbridge a destination.”

While they want everyone to have a great time, they do want to remind everyone there will be no coolers allowed, but they can purchase wine or beer and drink in accordance with the downtown alcohol ordinance.

For any further questions, contact The American at 229-515-3078 or Southern Philosophy at 229-400-9494. They look forward to seeing everyone there and making it an event to remember.