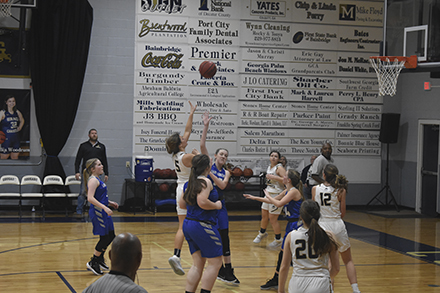 Caroline Wells (5) goes for three points against Georgia Christian on Friday night at the Grace Gym.

Wells, Woodrum and Lainey scored another two points in the second quarter, with Kate McRae also adding two points to the board.

Kate continued to put points on the board in the third quarter, being the only one to score with four points.

Coming off the Lady Cougars momentum, the Cougars were determined to put up a win too.

Wyatt Carpenter and Gabe Parker netted four points for the Cougars in the first quarter, with Carter Hathcoat draining a three pointer.

Hathcoat put another three pointer on the board in the second quarter, along with Seth Parker. Seth also scored a two-pointer and Kevin Brooks scored two points.

Gabe was on fire in the third quarter, scoring eight points, while Carpenter netted four points and Hathcoat scoring two.

The Cougars played the Citizens Christian Patriots the following night, where they also won, while the Lady Cougars lost in a heartbreaker.

Both teams are proud of the win against Georgia Christian and hope to continue their winning streak against North Florida Christian at home on Friday night.