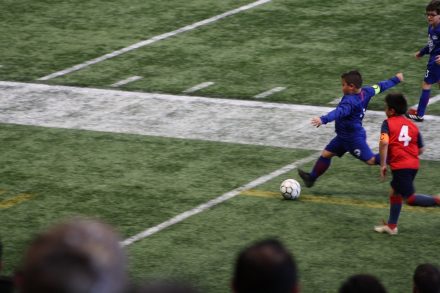 Miguel Castro goes for a goal in the game against Futbul Para Todos at the Mercedes- Benz Stadium.

Toluca Atlanta Soccer Academy recently invited club soccer director, Carlos Becerra to take two teams to the Mercedes- Benz Stadium for a soccer tournament, where they won in the U12 division.

Becerra took his U8 and U12 teams and called them Bainbridge Club de Futbol for the tournament.

On January 12, the U8 division, coached by April Pritchett, played against Futbol Para Todos and barely lost in a game of 5-4. Highlights of the game included Miguel Castro making two goals and Wesley Thompson scoring two goals.

The U12 division, coached by Jose Bonilla and Daniel Cruz, then took to the field for a matchup against club team Alianza Futbol, where they won 9-1. Camden Rodriguez scored four goals, while Jose Bonilla scored two goals and Julio Matias, Cezar Hernandez and Eduardo Miranda all scored one goal.

Becerra was excited for the U12 team and thankful to see residents from Bainbridge show up to support the team. He said the team traveled with over 110 family and friends from Bainbridge.

He looks forward to seeing what is to come in the club program after the exciting win.