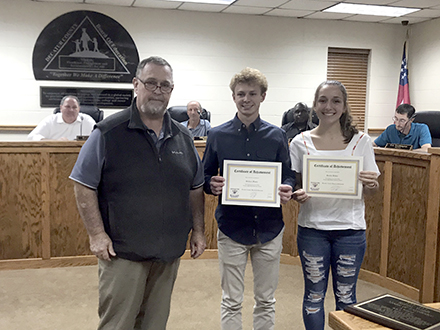 Bainbridge High School seniors Sandy Baker and Stokes Moore were recognized as the High School Heisman winners for their academic and athletic achievements Thursday night at the Board of Education meeting.

The High School Heisman is a continuation of the legacy of the original Wendy’s High School Heisman award that was founded in 1994, and is now sponsored by the Heisman Trophy Trust. The award recognizes the nation’s most accomplished, community minded senior athlete.

The program aims to inspire all students to harness their potential, push their limits and use their talents to advance their own future and the community around them. The trophy given to the students who symbolize this represents diligence, perseverance and hard work.

Baker and Moore represent everything the Heisman is supposed to be.

Baker competes in swimming and soccer, while Moore competes in cross-country, swimming, soccer and track.

Baker hopes to continue her athletics at the collegiate level, where she plans to study business and advertising and Moore plans to continue running, while studying marine engineering.

Co- Athletic Director, Jimmy Harris said through their athletic endeavors Baker and Moore have learned many valuable skills such as time management, working with others to achieve a common goal and giving of their time and effort to benefit others and it did not go unnoticed.

“Sandy and Stokes are the top one percent of the one percent,” Harris said. “We are very proud of their achievements all while representing the purple and the gold.”

Baker and Moore were shocked to win the award, both saying they did not expect it at all.

Baker and Moore had to be recommended by their teachers for this award before filling out an application and being selected.

They realize how difficult it can be to balance academics and athletics, but this award showed all the dedication paid off.

“When you’re doing a bunch of different sports and trying to take AP classes, you may want to pick one or the other, but it’s worth it to take the hard classes and compete in sports,” Moore said.

Baker agreed and encouraged her fellow classmates and future students to push through when the going gets tough, because in the end they will be rewarded.

“You may think no one will ever notice, but in the end they do,” Moore said.

Baker said neither her nor Moore realized how much effort they had truly put forward until Harris said they were the top one percent of the one percent, and that’s when they realized what they had been pushing toward was something to really be proud of.

Moore and Baker have not yet decided where they want to continue their education, but are looking forward to the future and thank everyone who has supported them both athletically and academically.