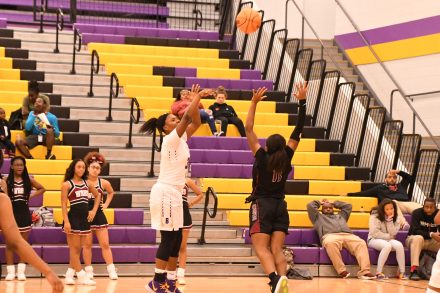 Taralyn Brown goes up for a shot during last Saturday’s game against Warner Robins at the Bainbridge Gym.

Bainbridge splits with Cairo, loses to Warner Robins over weekend

The boys had a big 65-37 win over the Syrupmakers. Tyrell Bryant had a double-double, scoring 10 points and snagging 10 rebounds for the night.

Also in double figures for the Bearcats were KJ Cochran and Mark Taylor Jr. with 14 points each. Other scorers included TJ Tarver with 8 points, Dewayne Kyles with 6 points, Lathan Levens with 4 points and Alvanni Williams, Dylun Worlds and Ahmari Borden with 2 points each.

The Lady Cats lost 47-40 to the Syrup Maids. Detavia Salter and Angel Peterson led the team with 9 points each. Behind them were India Parris with 7 points, Anndrea Porter and Kirston Noble with 4 points each,

Destiny Turner with 3 points and Taralyn Brown and Denise Chappell with 2 points each.

The Bearcats and Lady Cats lost close games to Warner Robins the following afternoon, with the boys losing 49-43 and the girls losing 37-35.

The Bearcats didn’t have anybody in double figures but were led by Dorrian Cooper and TJ Tarver with 9 points each. Other scorers for the Bearcats were Mark Taylor Jr. with 8 points, KJ Cochran with 6 points, Dewayne Kyles with 5 points, Tyrell Bryant with 4 points and Lathan Levens with 2 points.

Bainbridge’s next four games are against region opponents. On Friday, Jan. 17, the teams will host Harris County, then travel to Veterans on Jan. 18 and Warner Robins on Jan. 24. Bainbridge will play Thomas County Central at home on Jan. 25 and close out the regular season against Seminole County on Feb. 1.