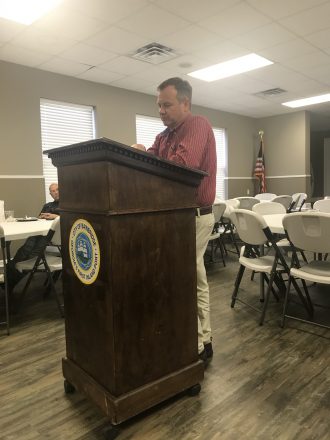 Don Whaley, who owns Health Products and Yogurt Too, spoke to Kiwanis Club on Thursday about small ways to improve one’s health and lifestyle going into the New Year.

Whaley said on average between Thanksgiving and the New Year, people gain seven pounds and are looking for various ways to shed the unwanted weight. Often, Whaley sees people immediately try to jump into the latest fad diet to kick-start their weight loss, and while they may seem effective at the time, Whaley knows they are not a way to live the rest of one’s life. Instead, he advocates for smaller, gradual lifestyle changes that can have big results going forward.

Whaley first encourages everyone to drink more water. He knows it is easy to get addicted to the caffeine and sugar in soft drinks, but he sees great benefits in drinking water, or including water in the diet. He knows giving up soft drinks can be a challenge, so he recommends simply replacing one a day with water to start with. Whaley said his customers that do this start to gradually see that water is more filling than soda and begin to drink fewer sodas throughout the day.

Whaley’s next recommendation is to clean out the pantry and refrigerator.

“If it’s not in the house, you’re not going to eat it,” Whaley said.

If there are leftover sweets from the holidays, throw them out so they aren’t tempting. He suggests when cooking to use turmeric and ginger, because they are wonderful herbs that have anti-inflammatory properties and can help with digestion.

Whaley also suggests trying walking more. He knows in the past, doctors have said people should walk 20 minutes a day, but new research has shown exercise is cumulative, Whaley said. He explained that even if one is only walking two minutes here or two minutes there, it all adds up.

“Little trips, or if you decide to take the stairs instead of the elevator will help,” Whaley said.

Along with walking, Whaley reminds everyone to move around and attempt to stretch, especially if they are at a desk job, at least once an hour. Whaley said stretching, even just twice a week, can make a huge difference. While stretching, he also works on his breathing and encourages others to do the same.

“It’s amazing what breathing can do sometimes… two or three deep breaths can make you feel better and like you can start again,” Whaley said.

Whaley’s final suggestion is to work on one’s sleep schedule. He said to try to establish a normal bedtime routine, because a sleep routine can also impact weight loss and energy.

Whaley said he has struggled with sleeping and one thing that has helped him was CBD oil, which had a calming effect on him and improved his sleeping patterns.

With all these suggestions in mind, Whaley encouraged everyone to try these small steps to help improve their life.

A look at the Top 10 taxpayers of Decatur…