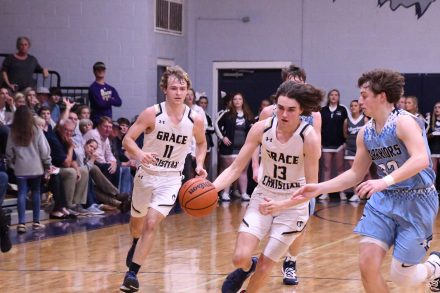 Carter Hathcoat dribbles the ball down the court, while an SGA Warrior player tries to steal the ball. Behind him, Seth Parker works to protect the outside of the ball.

The Grace Christian Academy Cougars and Lady Cougars basketball team faced off against tough region opponent, SGA on Thursday night, where they both ended in a loss.

Despite the final scoreboard, the Cougars were neck and neck throughout the game.

The Cougars ended their game 63-74. Even with the loss, the team still had a lot to be proud of. They previously lost against SGA by a bigger margin and have since improved to close that point spread.

Coach Travis Harrison hated to see the team lose, but he did see some positive to the game.

“There were moments where we shared the ball well and got excited for each other,” he said. “If we can build that camaraderie up, I think we will have a good end to the season.”

However, with the loss Harrison plans to work the team on conditioning before they play Citizens Christian. Harrison has not yet seen Citizens play, but was proud of his team’s fight and hustle on Thursday and thinks they will bring that same intensity against Citizens.

Farewell to an outstanding quarterback

It appears Tua is headed to the NFL. As much as I thought he would come back for another year... read more