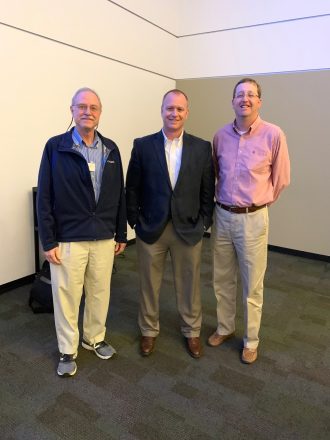 Decatur County Schools Superintendent Tim Cochran gave his annual state of the schools report at Rotary this week. It contained information about how the public schools are funded by the state based on enrollment figures. He also showed graphs indicating how enrollment figures have been in a decline over the past ten years as the economy of the area suffered from declining population. An even more notable concern is the 5.1 percent decline in enrollment for 2019, as a new school opened in Decatur County, resulting in the loss of 200 students. Overall there has been a 14.3 percent decline over the past ten years.

This is important information to the community as state funding is based on the student population as counted in October. Cochran indicated the importance of anticipating these changes and making allowances for how the schools will be financed and operated.

He also discussed the College Career Ready Performance Indicators (CCRPI), determined by the legislature—not educators. The rankings have a direct coordination with the poverty rate, and Decatur County has been designated in the 94 percent poverty rate— a number that has increased over the past six years. This entitles students to free and reduced lunch rates.

Cochran said most people think of the poverty rate as low income, but he said it is so much more. There are many students in schools with poor home lives; no one to take care of them.  He said this is being seen in the pre-K and elementary students who begin school without even being potty trained. “Our teachers are potty training kids in Pre-K and early elementary —something we never had before.”

A lot of those students will drop out in middle school and the schools are trying to give them skills to make them employable.

Cochran then told of some of the improvements in education being implemented. Foreign languages are being introduced in elementary and middle schools. Agriculture classes at the elementary level, as well as character development clubs designed for boys and girls. There are after school programs offered in curriculum as well as extra-curricular.

The dual employment programs have grown substantially, as students, mostly in the upper grades can complete their high school graduation requirements while at the same time enrolled in college or career academy classes. This past semester saw 218 students enrolled in the dual enrollment programs. This proves to be a financial savings for parents, and gives students a big start on early career development. He cited the last session saw twelve students become certified welders, while others completed nursing courses.

In answer to a question from the audience, Cochran stated he was definitely at the table when the community made their presentations to Taurus. He said presentations are often made to new businesses to train employees they may need, especially in megatronics, electrical and mechanical engineering programs. He indicated he has made presentations to the state governor about the importance of education as it is related to economic development of the area—how important it is for the educational system to be training and preparing students to work for new companies.

He then closed with information on some of the improvements being made to the athletic grounds and buildings, and the plans to consolidate all the administration offices in one building. He made it clear that SPLOST funds were being used for these facilities, and cannot be used to pay personnel.

Cochran said it takes constant monitoring, observing and planning for the changes, especially the enrollment figures. As they decline, so does funding. “We are trying to be frugal and stay ahead of the curve.”

Bainbridge falls to Veterans, bounces back against Berrien

The Bainbridge Bearcats (10-8) and Lady Cats (8-10) basketball teams both dropped to 1-2 in region play last Friday with... read more