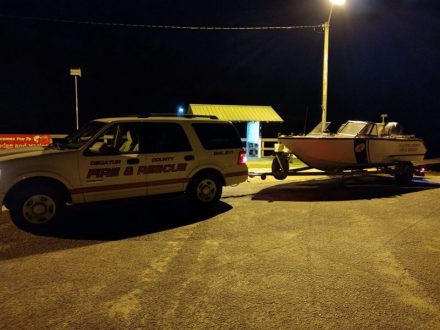 Decatur County Fire and Rescue arrived at Wingate’s Landing on Saturday night with their boat in tow to find two boaters that had crashed earlier in the day.

Firefighter Jamie Earp said this is the second boating accident they’ve responded to in the past 30 days, but this accident was more involved than the previous incident.

Earp said the boat the passengers were in flipped over. Earp said at this time DCFR is unsure what caused the boat to flip, but in order to stay afloat one of the passengers held onto the boat for approximately five hours, before he and the other passenger made it to land.

Although the passenger’s cell phone had severe water damage, he was still able to call 911 for help. Earp said the passenger was surprised his phone worked, but so thankful.

According to Earp, 911 was able to ping the cellphone and provide DCFR with a location approximately two miles from the boating accident. Once firefighters saw the accident and started their land search, they found the passengers within minutes. DCFR then turned patient care over to Decatur EMS. Earp said he is unsure of the victim’s injuries, but he believes they were close to suffering from temperature related illnesses due to the below average weather.

“We were only as successful as we were because of volunteer firefighters,” Earp said.

He is thankful for their help in this rescue, and encourages boaters to pay attention to their surroundings when on the water.

He especially reminds everyone to look out for stumps and sandbars.