Bainbridge falls to Veterans, bounces back against Berrien 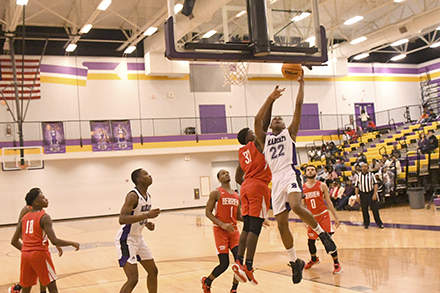 K.J. Cochran (22) gets up over a Berrien defender for a layup during the Bearcats’ game at the Bainbridge gym last Saturday.

The Bainbridge Bearcats (10-8) and Lady Cats (8-10) basketball teams both dropped to 1-2 in region play last Friday with losses to Veterans, but bounced back against Berrien the next night.

Both teams still have plenty of opportunities to gain some ground in Region 1-AAAAA with two games against Warner Robins and single games against Harris County, Thomas County Central and Veterans still left on the regular season schedule.

The Bearcats lost a close 68-60 decision to the Veterans Warhawks. Three Bearcats jumped into double scoring figures for the team: KJ Cochran with 14 points, TJ Tarver with 12 points and Mark Taylor Jr. with 11 points.

Other scorers for the Bearcats were Dorrian Cooper with 9 points, Dylun Worlds with 6 points, Dewayne Kyles with 4 points and Lathan Levens and Tyrell Bryant with 2 points each.

The Lady Cats also lost a close game to the Lady Warhawks, falling 50-45.

Bainbridge took to the court last Saturday night and found its groove again.

The Bearcats had a commanding 60-30 win over Berrien, with Mark Taylor leading the way with 20 points scored. K.J. Cochran also had a great night with 12 points scored. Other scorers for the Bearcats were Dorrian Cooper and Dewayne Kyles with 8 points each, Tyrell Byrant with 6 points, TJ Tarver with 4 points and Ahmari Borden with 2 points.

Bainbridge will take on Cairo at home on Friday, and then host region-opponent Warner Robins for their first meeting of the season on Saturday.