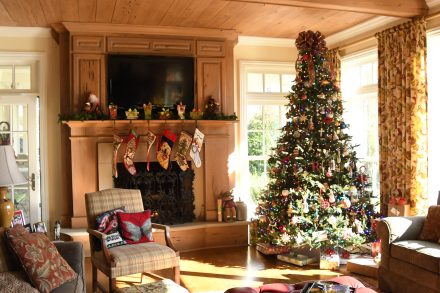 Walking into the home of Edward and Tonya Reynolds, guests will feel like they have entered a featured house in Southern Living Magazine. The Reynolds home is subtly decorated for Christmas with pieces and ornaments passed down from family members over the years.

The entrance features two large wrought iron urns filled with fresh poinsettias, along with an arching garland and wreath, featuring fresh holly berries. Upon entering, guests will enter the foyer and see a beautiful white, porcelain nativity scene that was Edward’s mothers. Above the nativity scene features another fresh flowered filled garland to highlight the beauty and serenity of the nativity scene. It sits atop a golden mirror and has lilies intertwined.

Edward said the decorations in the house are a mixture of old and new. Edward’s stocking, along with his son, Griffin’s was made by needlepoint by his mother as well.

The stockings are all hung in the main living space on top of the wood-burning fireplace right next to the sprawling tree, which is the main centerpiece of the room. The tree features an array of ornaments from various locations and crafts made by the kids, Griffin, Hudson and Mary Mercer, from over the years.

“All of the ornaments are from trips we’ve gone on and we get one to remember that type of stuff,” Edward said. “That’s why they’re sort of mismatch.”

The tree has been a staple in the Reynolds family for the past five or six years, Edward said, but this year they had to some “surgery” on it.

Some of the lights had burned out, so Tonya cut them out and restrung the tree, because she liked it so much. However, this year the lights had a twist.

Since the couple got married, they have debated over white or colored lights. Edward said he prefers colored, where Tonya likes white; this year they compromised and put both on the tree.

“That way we both get a little victory,” Edward said.

Tonya said she starts putting up the Christmas tree on Thanksgiving night when she is out of school and the kids are able to help her with the tree.

“Me and my mom bond over decorating the tree,” Mary Mercer said.

The family is excited for Christmas and that is why they love decorating. They said they have a lot of family and friends over on Christmas Eve, so they try to go all out on decorating.

The Post-Searchlight was honored to be admitted into the Reynolds’ home prior to their Christmas Eve gathering and we wish them a very Merry Christmas.