Shop With a Cop puts gifts under tree for local youth 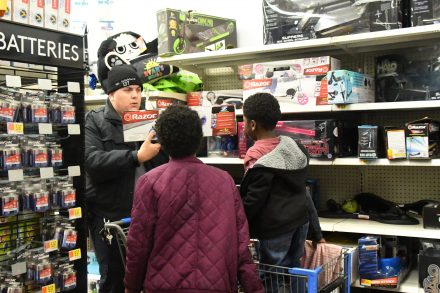 Sgt. Strickland shows his two shoppers a Razor scooter that they had asked about for Christmas.

Kids of all ages could be seen grinning ear to ear at Walmart on Friday morning, as cops joined them to begin the annual, fun process of shopping with a cop.

For the past four years, Bainbridge Public Safety has teamed up with Walmart to allow children in need to shop with a cop, and receive the gifts on Christmas Day with Santa Claus.

This year, BPS selected 12 families, which included 26 children to participate in the event.

Prior to shopping, Walmart employees treated the children and their families to cookies and hot cocoa and a visit from Santa himself. Officers were then given approximately $125 to spend on their given child, excluding food and drinks. Parents accompanied some of the younger shoppers, hoping to help them make “wise” decisions and purchase necessities such as coats, shoes and socks, along with toys.

Once finished, the families and their officer headed back to BPS headquarters, where the officers and parents started wrapping up the purchases to put under the tree. While some officers were wrapping gifts, other officers were outside on the grill preparing a delicious lunch for the parents. Kids were treated to chicken nuggets, while parents had chicken wings, hot off the grill.

While the joy can easily be seen on the children’s faces throughout the entire experience, officers really take this time to spread Christmas cheer for children who may not often see it. Officers allow the children to go overboard at checkout and sometimes pay for the gifts the children really wanted out of pocket.

Administrative assistant Janette Mowry said they have extra money in place in the event a child does go over the allotted limit by a few dollars, but some officers want to take car of it because they’ve built a bond with the child and don’t mind spending their money on them.

“I think the event went great overall,” Mowry said. “Everyone seemed to have a great time and get exactly what they wanted and that it’s for- families who really need it.”

Mowry is so grateful to Walmart for giving them the grant to make this possible. Because of this grant, children around Bainbridge will wake up Christmas morning with gifts they never expected to receive.