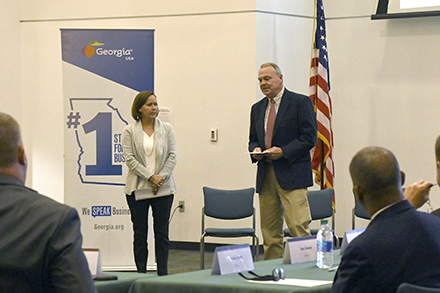 The Board of Directors, led by commissioner Pat Wilson, was in Bainbridge to celebrate the grand opening of Taurus USA’s new manufacturing facility. They were treated to dinner at Southwind Plantation, attended a special downtown block party event Wednesday night and received a tour of downtown Thursday morning before the ribbon cutting at Taurus USA.

Projects in development that the Board of Directors were able to see included the Willis Park Hotel, an outdoor event and concert space, and the newly opened J. Christine Esthetique and Eagle Saloon apartments.

Glover explained the impact of the recession to Bainbridge, and how she and the Downtown Development Authority have worked hard to draw new businesses back to downtown. The payoff has hit its peak this decade with 32 properties being sold in downtown in 2018. Another 19 were sold in 2019. The vacancy rate of downtown Bainbridge has dropped to 16 percent.

The Rural Tax Incentive legislation that encouraged economic growth in small towns was a massive part of Bainbridge’s recent rise. For example, the owners of the Southern Philosophy brew pub took advantage of all three areas of the tax incentive: jobs, investment and rehab.

“You can see what a great impact this legislation has had on our downtown, and we are very, very thankful for that,” said Glover.

McCaskill reviewed the journey to sealing the deal with Taurus USA to move to Bainbridge, as well as many other projects that have happened over the past few years.

“We have had major expansions with most of all of our industry,” said McCaskill. “We got hit really hard during the recession, but coming out of the recession, everybody has done expansions.”

Companies such as Georgia Gulf Sulfer, Southeastern Minerals and Harrell Ag Products have grown exponentially over the past two years. A new rail facility, to be run by Short Line Railroads, has recently been installed. Danimer Scientific, a leader in non-petroleum based plastic, has slowly built up to a base of 100 employees and are beginning to work with manufacturers, said McCaskill.

A state of the art shooting and sporting clay complex is also in early development stages. The facility will feature a clay course, rifle and pistol ranges, and archery.

“We are planning big,” said McCaskill.