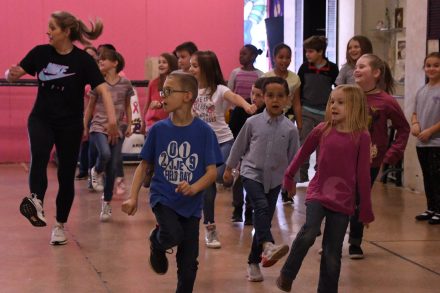 Students in the QUEST program danced to the Git Up and other line dancing songs on Friday morning at their field trip to Lucretia’s School of Dance.

Elementary students in the QUEST program were treated to a field trip on Friday morning, where their lesson on the power of dance culminated with learning a line dance at Lucretia’s School of Dance and listening to a bag pipe player in Willis Park.

Brandi Deal, the gifted coordinator for Decatur County Schools, said the students have been focusing on the power of music and how it impacts the body and makes it move. They have also been studying Scottish history and how Scottish dance has made an impact in even today’s dance world.

“Line dancing and square dancing both have roots that trace back to traditional Scottish dance,” Deal said.

Once the kids learned how to line dance, they traveled to the gazebo, where a bagpipe player played a tune for the students and discussed his Irish heritage. In order to also incorporate STEM into the field trip, the bagpipe player discussed the physics of how the instrument worked.

Deal said Friday’s trip was especially exciting for the kids who are more musically inclined, while the last nine week’s trip catered more to the students are artistically inclined.

“It’s perfect because each QUEST rally hits a different area for the kids,” Deal said. “Next nine weeks will be a STEM based rally for the kids who haven’t really found their niche in either of these yet.”

Deal did say that some of the kids were a little nervous, because they said they didn’t know how to dance, but dance teacher Kacee Franklin really iterated to the students that dance is supposed to be fun, and that dancers just feel the music; it doesn’t have to be structured.

Student Logan Marzolf said he had never learned to square dance before, but he really liked it and would do it again.

Student Kenslei Williams agreed and said her favorite was when they learned to do the square dancing.

“Whenever I learn a new experience it’s kind of fun for me,” she said. “I just want to thank Mrs. Kacee for helping us learn this.”

Friday’s field trip completed the power of dance and Irish history lesson, but Deal promised the students they had more to look forward to in the coming weeks.