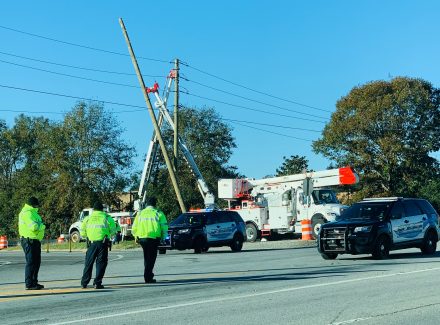 As children and parents prepared to return to school and work after the Thanksgiving holidays, many on the East side of town were met without power on Monday morning due to an accident that took down power lines.

Bainbridge Public Safety Officer John Walker and Sgt. Tim McCain were patrolling around 1:30 a.m. near the Circle K, when they observed a power outage. As McCain tried to locate the cause of this, he saw that a vehicle had struck the power lines. Walker approached the scene and saw a black Ford Explorer tangled up in electrical lines, along with the driver, Monica Fountain, exiting the vehicle.

Walker instructed Fountain to move away from the power lines for her own safety and proceeded to call EMS to assess her, before questioning her.

Following the assessment, Fountain was cleared and Walker asked Fountain what happened.

Fountain said she was unsure; her GPS told her to take a left and she hit the electrical poles instead. Upon hitting the poles, Fountain continued to drive with the electrical wires attached to her vehicle down Shotwell Street. Walker then asked if she had been drinking, and Fountain said she had not, but later revealed she had a drink approximately four or five hours ago.

To ensure Fountain was telling the truth, Walker asked her to blow into a portable toxicity meter. Fountain refused to comply, so Walker asked her to perform a standard field sobriety test, which she also refused. Walker tried once more and read Fountain the Implied Consent for persons over 21 and asked for a blood sample, but she refused to give a sample.

Upon further investigation, Fountain was charged with one count of DUI less safe, one count of failure to maintain lane and one count of striking a fixed object.