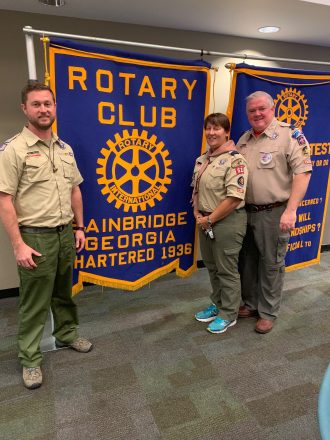 Margueritte Jackson is surrounded by Jerry Whitaker on the left and Mark Milhollin on right.

Two Rotarians, Margueritte Jackson and Mark Milhollin, are also very active in Scouting. They, along with Terry Whitaker, Executive Director for the Suwanee River District of Boy Scouts, presented the program at Rotary this week.

Milhollin told of the experiences he and Margueritte had working as volunteers at the 24th World Scout Jamboree held July 22 to August 2, 2019 in West Virginia.

They were part of a troop of 11,000 volunteers who worked with 46,000 people from 160 countries. The two taught hunting conservation as part of a shooting sports staff. Milhollin said the participants practiced target shooting, using 1.5 million rounds of ammunition, declaring, “and no one was injured.” Other topics covered were archery and tomahawks, and the group participated in mountain biking, zip lining, whitewater rafting and cultural classes.

Margueritte then gave a Bainbridge scouting update, beginning with the Jones Wheat open house where they registered 40 cub scouts and 39 adult leaders.

Some of the activities they participated in were: taking part in the Pinewood Derby in 2018, camping—doing six campouts a year, swimming lessons, visits to the aquarium and zoo in Atlanta. They sponsored a ceremony honoring veterans. Two scouts reached the status of Eagle Scout this year, and one more is pending.

Plans for the future are to make visits to the state parks and more camping. ‘

The Bainbridge Rotary Club supports the local effort through donations.

There are two troop locations in Bainbridge. The Methodist Church will continue to house the Girl Scouts and the Boy Scout building on East Alice Street will be the meeting place for boys.

She explained that she feels strongly that girls, if they are so inclined, should have the same opportunities to camp and do the things boy scouts do. It is a chance for them to hang out with their fathers. She said she now has one female scout in the Cubs that will move into the Boys division, with the opportunity to become an Eagle.

In closing, she thanked the Rotary Club for their donations to the Scouting program, and asked for their continued support.

Three University of North Georgia (UNG) students, including Uriyah Davis of Bainbridge, made history Nov. 17, when they were presented... read more