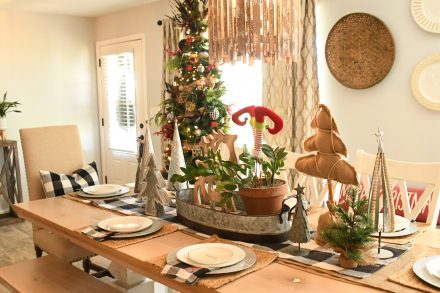 Simple metal and burlap Christmas trees adorn the dining table at the Shirley’s home, while their main tree stands bright by the door.

Simple, clean farmhouse collections are the theme at Beverly and Ryan Shirley’s home this Christmas.

Beverly said she begins decorating shortly after Halloween, because the end of November and December are such a busy time for the family, with their youngest daughter on a competition cheer team.

“Ryan doesn’t like me decorating so early, but I just love Christmas and I want plenty of time to enjoy it,” Beverly said.

Every year, Beverly alters the decorations slightly, but this year she aimed for the style of HGTV stars, Chip and Joanna Gaines’, farmhouse design.

“This year I went for more of the galvanized, silvery tones,” she said. “I didn’t want everything as dressy.”

Beverly admits that even with the change in her Christmas decorations, she never gets rid of the old ones. She said she has approximately four bins in her storage shed of old décor from previous homes.

She said she uses her older décor and brighter Christmas pieces in her kitchen. She usually lets her children pick out what goes in that space and said that’s her space to really have fun in.

Along with the silvery tones and bright spots in the kitchen, guests can also spot an array of Christmas carolers throughout the house.

Beverly said Ryan introduced these one of a kind Christmas carolers to her when they got married, and asks for them for his birthday and for Christmas. Beverly began to also fall in love with the carolers and said they try to pick out one that’s unique for whatever phase of life they are in. Their love for the carolers has also influenced their oldest daughter, Madelyn, who began her caroler collection last Christmas.

“We probably have 40 carolers total now,” Beverly said. “The carolers are something we all look forward to.”

No matter how decorated it is, Beverly said her main goal is to make sure the house always still feels like home to her girls and guests. She never wants to go overboard.

The simple, clean décor and collectables were the perfect mix and The Post-Searchlight was honored to be admitted to the home of the Shirleys as they prepare for the holiday season.