Bainbridge Little Theatre puts on The Lion, The Witch and the Wardrobe 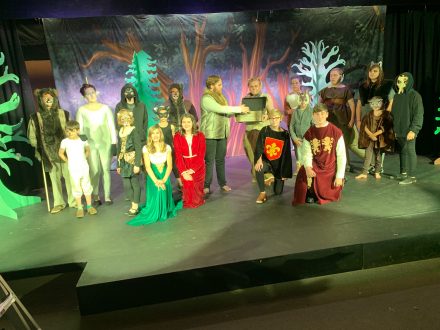 The cast of The Lion, The Witch and the Wardrobe all smile at their practice on Monday evening.

A classic piece of children’s Christian literature, The Lion, the Witch and the Wardrobe, is the production chosen by Bainbridge Little Theatre for its annual Christmas holiday show this December. It opens this Thursday at 7:30 p.m. and continues its run each night on Friday and Saturday before closing with a Sunday, Dec. 8 matinee at 2:30 p.m.

It is one of the seven novels for children written by C.S. Lewis contained in  “Chronicles of Narnia,” and has a magical theme.

Four young children of a London family were sent to the country to live with an old professor during the days London was undergoing nightly bombing by the Germans during World War II .

As the children explored their new surroundings they discovered a large wardrobe. Upon entering it they found themselves in a fantasyland where animals talk and a magical lion named Aslan fights against the evil White Witch, Jadis, who represents the power of Satan. The Lion symbolizes all the goodness of Jesus and Christianity.

It is basically a story of love, faith, courage and giving, with its ultimate triumph of good over evil.

The show is being directed by Kier Klepzig who has held many leading roles in BLT productions; but this is his first time to direct a show. He said he was eager to work on this one, saying, “It’s a story everyone knows and loves.”

It stars a magical group of 28 youthful actors, many of whom are convincingly portrayed as animals thanks to creative costuming.

Rachael Crager is the stage manager who holds it all together and Sterling Widner is in charge of lighting.

Annual Yuletide Jubilee welcomes all to Willis Park next…