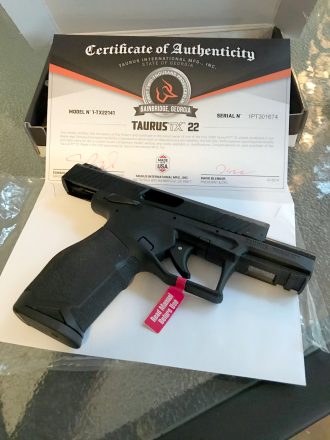 A limited run of the TaurusTX 22 pistol is avaiable in some stores in Bainbridge. Only 2,000 were made with “BAINBRIDGE, GA” printed on them.

Local residents can be among the first to own a gun made at the hometown facility. The first 2,000 TaurusTX 22 pistols, exclusively printed with “BAINBRIDGE, GA” on them, are available for purchase at Flint River Outfitters, American Pawn and City Pawn in Bainbridge.

“I feel like it is an honor for them to give us the opportunity,” said American Pawn owner Amanda Black. “Taurus has been super involved with the community so far since they have arrived, and I really appreciate that.”

“We are very pleased and glad that they are letting us do it and glad we can do whatever we can to help them and the community,” said Shirley.

Both Black and Shirley said there are still TaurusTX 22 pistols available at their stores.

Flint River Outfitters sold out much quicker than expected. Owner Edwin McCullers deliberated on how many to order at first from the manufacturer at Commodore Industrial Park, moving from 20, then to 40 and finally to 100 earlier this week. It only took a day for them to sell out. McCullers had another 100 brought to the store, all of which were sold by Friday.

“It’s a big deal,” said McCullers. “We were just honored.”

He added that he hopes to have another 100 of the exclusive pistols in stock by next Tuesday.

According to Taurus USA, the TaurusTX 22 is engineered to deliver best-in-class accuracy and reliability. The full-size, rimfire polymer sporting pistol shoots and feels every bit like a custom-tuned competition model—without any costly upgrades or modifications.

Taurus USA will have a ribbon cutting next Thursday to officially celebrate the opening of its new 200,000-square-foot manufacturing facility at the Commodore Industrial Park in Bainbridge.