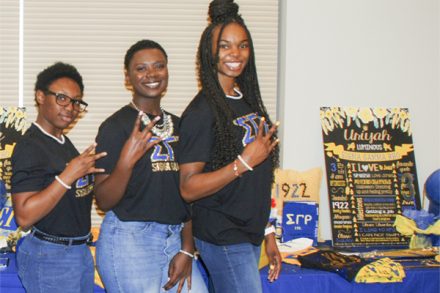 Three University of North Georgia (UNG) students, including Uriyah Davis of Bainbridge, made history Nov. 17, when they were presented as members of Sigma Gamma Rho Sorority Inc., the first African American sorority presence at UNG.

Imani Arnold, Uriyah Davis and Angel Rosemond were introduced as neophytes, or new members, of Sigma Gamma Rho Sorority Inc. during a ceremony Nov. 17 on UNG’s Gainesville Campus. Membership will be open on the Gainesville and Dahlonega campuses.

“It still hasn’t fully clicked in my mind that this happened,” said Davis, a junior from Bainbridge, pursuing a kinesiology degree. “I called my dad in tears and told him, ‘This is real. This is really going to happen.’”

Toni Roberts, state representative for Sigma Gamma Rho, said recruiting and training the new members at UNG was significant for her.

Adding culturally based fraternal organizations at UNG is part of the institution’s mission to serve its diverse student population, said Aubrey Frazier, director of fraternity and sorority life at UNG.

“When I started at UNG, I was tasked with expanding Greek organizations on the Gainesville Campus and starting culturally based fraternal organizations at UNG, because we didn’t have any,” she said.

Frazier said having both culturally based organizations will provide students more options to experience.

Rosemond, a junior pursuing a modern languages degree with a concentration in Arabic language and literature, said she decided to join Sigma Gamma Rho to belong.

“We’ve never had a historically black sorority at UNG, and Dahlonega is not the most diverse campus,” said the 20-year-old from Douglasville, Georgia, and a member of the Corps of Cadets. “Now, it will be nice to have a group of women who look like me and who have gone through the same struggles as me.”

She, Arnold and Davis plan to recruit more women in the spring at the Dahlonega and Gainesville campuses. Informational meetings will be Dec. 5 in the Martha T. Nesbitt Building on the Gainesville Campus and Dec. 6 in Young Hall on the Dahlonega Campus.

The advising chapter will be Sigma Gamma Rho’s Mu Epsilon Sigma alumnae chapter located in Roswell, Georgia. Tye Demby, who will act as UNG’s adviser, said the alumnae group will help with membership intake, recruitment, training and development, and marketing and branding.

“We are excited because UNG is the first undergraduate chapter Mu Epsilon Sigma is advising and excited that we are the chapter that was a part of making history at UNG,” she said.

Frazier plans to use the excitement as momentum to expand Greek-lettered fraternal organizations at UNG.

Plans are in progress to solicit interest for a Latina sorority and establish a Delta Sigma Phi group on the Gainesville Campus.

Bainbridge natives working on movies being filmed in Thomasville, Tifton

Georgia seems to be taking over the film industry; Atlanta is now being referred to as ATLwood and productions are... read more