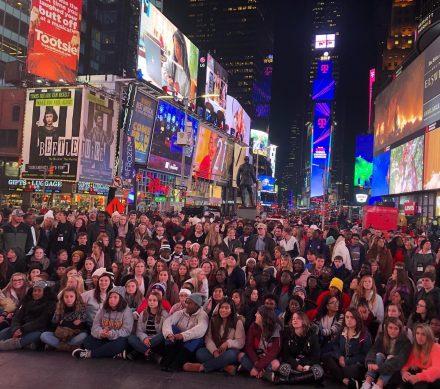 The Bainbridge High School Band stopped for a group photo in the center of Times Square during their weeklong band trip to Philadelphia.

The Bainbridge High School Band departed Saturday for their trip to Washington D.C., New York City and Philadelphia, where they will participate in the Dunkin Donuts Thanksgiving Day Parade.

The band, faculty and chaperones departed the school at approximately 4:30 a.m. and arrived in Arlington, Virginia at 9:30 p.m. after a long day of traveling.

Everyone got an early start on Sunday morning when the band headed off to Washington D.C. to visit an array of memorials, museums and other attractions. They first visited the Lincoln Memorial, before students were paired into small groups to visit the Vietnams Veterans Memorial, Vietnam Women’s Memorial, Korean War Veterans Memorial and the World War II Memorial.

They then reunited and all departed for the Grant Memorial and the National Air & Space Museum. Following those attractions, students could choose to visit the Museum of Natural History, the Museum of American History or the United States Holocaust Memorial Museum.

Once the student’s free time was over, students had dinner at a local Italian restaurant, Buca Di Beppo Italian Restaurant, before departing for Newark, New Jersey.

Monday morning, the group traveled to Lower Manhattan and visited other iconic locations. They began by visiting the 9/11 Memorial Plaza, which is a tribute to the past and a place of hope for the future.

They later traveled to Time Square for a self-guided walking tour of the Broadway Theater District and a group photo. After the photo and tour, students were treated to the Christmas Spectacular at the Radio City Music Hall.

Tuesday, the student’s tour of New York continued with a visit to the Rockefeller Plaza. Once there, students could pair off into groups for a self-guided walking tour, where they could visit some 5th Avenue landmark locations such as, Tiffany’s, Saks Fifth Ave., Cartier and the St. Patrick’s Cathedral.

Following their self-guided tour, students met up for a narrated bus tour of Manhattan, before a dinner at the Hard Rock Café and attending the Broadway musical, Wicked at Gershwin Theatre.

Wednesday, the students departed for Philadelphia, where they visited the historic district and saw the National Constitution Center, Independence Hall and other locations, before enjoying a fun meal at Dave & Buster’s.

Thursday will be the day of the band’s performance. The Dunkin Donuts Thanksgiving Day Parade will begin in Philadelphia at 9 a.m. and can be streamed on 6ABC.com on Thanksgiving Day.

Following the parade, students will gather as a “band family” and enjoy a traditional Thanksgiving dinner at the Westin Crystal City Hotel.

They will then depart back for Bainbridge at 5 p.m. and arrive on Friday.

Christmas for 2,900 kids around the world