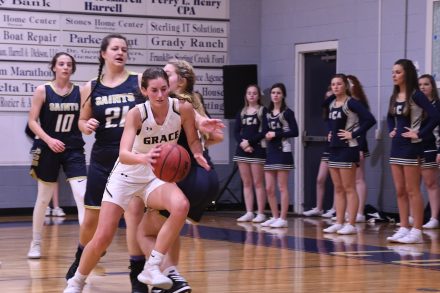 Lainey McRae takes the ball and tries to escape from a squad of Saints defenders.

The Lady Cougars and Cougars basketball teams took on the Byne Saints at home on Thursday, where the Lady Cougars won in a big way, 60-11, and the Cougars came up just short 70-80.

Lady Cougars Coach Lance Godwin was proud of the team and their win and said the girls really played with a lot of intensity, which he was glad to see after coming off a loss from Sherwood.

“We played man to man defense great and hustled the whole four quarters,” he said proudly.

One of the key factors in the win was making layups. Godwin said Lainey McRae really contributed in making those layups and helping gain the win.

“She came out and played the best she’s played the whole time,” he said.

Lainey, along with her teammates focused on what they practiced after their loss, which was breaking the press, not throwing away the ball and setting up on offense.

Senior Kate McRae said she thought everyone played as a team and no one played for themselves.

Caroline Wells was proud to see everyone making their free throws and being strong on defense, as Godwin had mentioned. Wells said they changed up their defense and their win against Byne was a result that it’s working.

“I’m just really proud of girls for playing hard,” Godwin said. “When that’s what happens, you get the W.”

The Lady Cougars will face off against North Florida Christian on Monday, December 1, where they are hoping for another blowout win.