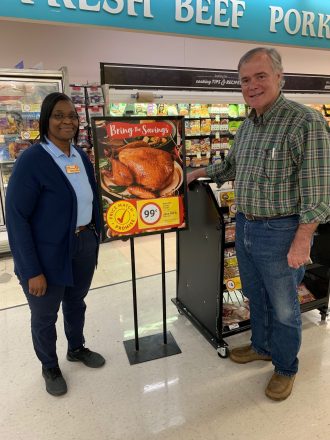 Joe Livingston meets with Winn Dixie Customer Service Manager, Tina Ward, who will be up all night on Wednesday before Thanksgiving cooking many turkeys and all the trimmings.

As folks begin to make plans for Thanksgiving celebrations this year, it is time to remind all and recognize the Thanksgiving Day Dinner distribution held each year at the J.O. Smith Building of the First United Methodist Church of Bainbridge.

The event originated in the late 1980’s when Mayo Livingston Jr. had the idea to share Thanksgiving bounty with those less fortunate, shut-ins and those without families.

It has grown each year, although last year as folks in Decatur and Seminole Counties struggled to recover and rebuild from the devastation of October’s Hurricane Michael, there were fewer volunteers. In spite of it all, over 450 plates were filled and delivered, with more going to Seminole County than ever before.

Each year the project has grown and the public has been faithful to volunteer their time for an hour or so on Thanksgiving morning. Beginning at 8 a.m., they line up to fill plates of food and carry them to the waiting vehicles who are making the deliveries. By 9:30 a.m. they are out of there and headed back home to tend to their own dinner preparations, according to Mayo’s son Joe Livingston who handles the event planning now.

Joe has already begun appearing at local churches to make an appeal for donations and volunteer help.

Joe says it is more organized this year as they have registered it with the State of Georgia as the Mayo Livingston Jr, Thanksgiving Day, a 501-C-3 corporation. They can now start accepting donations to fund the day.

From day one Winn Dixie has been involved, as some of their staffers cook the turkeys, dressing and trimmings. Likewise, the Jones family at The Pond House has always donated the rolls and pumpkin pies.

Mayo, who will be age 90 in December, has turned the organizing duties over to his son Joe, but he always manages to be present on the day to oversee the proceedings.

Recipients are determined in several ways, according to Joe. The most referrals come from the schools, churches and Salvation Army, but he also receives phone calls from individuals. He believes they will be preparing 500 plates this year.

City could receive funds to clean up brownfields