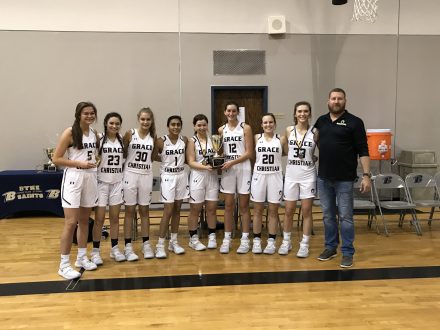 The Lady Cougars basketball team kicked off the season this past weekend at the Byne Tip Off Tournament in Albany, where they took home first place and players were named to the all tournament team.

The team is in their first year of coaching by Lance Godwin, who said he really wanted the team to focus on defense prior to this first face off.

“Defense will win the game every time,” Godwin said.

Godwin also had the girls focus on stamina and getting into shape. He knows they are a small team of only eight girls and didn’t want anyone getting too winded. The Lady Cougars’ stamina proved to be too much for the other teams.

“We executed the plays we had drawn up and outhustled both teams,” Godwin said.

In addition to the wins, Caroline Wells was named MVP of the tournament, while Kate McRae and Emilia Woodrum were named to the all tournament team.

Godwin knows this is only the beginning and they will soon have to face off against their biggest region competitor, Georgia Christian.

However, following these wins Godwin is confident.

“These wins give us a little bit of a better look,” Godwin said. “It calmed the girls’ nerves and they feel accomplished like all the hard work is paying off.”

To see the team’s hard work in action, Godwin invites everyone to watch them on Thursday night at home as they take on region competitor, Sherwood.

Bearcats go on road for matchup against 9th-ranked Bears