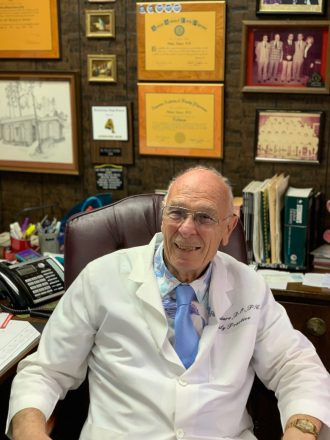 Dr. Philip Todaro smiles in his office in Bainbridge during his last week before retirement.

On November 27, Dr. Philip Todaro will lay down his stethoscope, close the doors of his office and retire after 46 years of serving the medical needs of many in the Bainbridge and Decatur County area.

Dr. Phil grew up in Italy, where he received his preliminary and advanced education in Sicily. Then, in 1959 he emigrated from Palermo to Detroit, Michigan, where he received his BA and completed one year of graduate school at Wayne State University. In 1967 he enrolled at the Kansas City University of Medicine and Biosciences in Kansas City, Mo., receiving a Doctor of Osteopathy in 1971. He completed a year of internship at Grandview Hospital in Dayton, Ohio, then served in a general practice in Germantown, Ohio for one year.

Although he grew up in Italy, his mother was a native born citizen of the United States, having been born in Tacoma, Washington. Todaro became an American citizen by virtue of the fact his mother had been born in the U.S.

In 1973 he moved to Bainbridge, Ga., after a classmate told him that Bainbridge was looking for doctors. “I came here and loved it,” he explains. He loved the Southern hospitality and the really nice people who welcomed him and his wife Lynda.

He also loved the proximity to the beach. “It has been the best of both worlds,” he explains. He built his own office building and it reflects his travels and interests.

Throughout his practice he has had opportunity to travel abroad and to attend medical meetings and conferences all over the world.

“I could not have been happier anywhere else,” he says.

He admits he is looking forward to not working at a scheduled job; but will enjoy keeping busy puttering around his house and gardens on Twin Lakes and staying part-time at their beach condo, as well as continuing their travels.

Both Phil and Lynda have immersed themselves into the world of theatre and arts in Bainbridge, although he admits she is more into the social events than he. She has also served as an RN at his practice over the past few years, and she too is looking forward to finding out what it is like to not work.

Both are lovers of anything Italian, especially the cuisine and are known among their friends as connoisseurs of Espresso coffee.

As he closes out his last few days of medical practice, he bids his patients “Ciao Y’all, adding a Southern touch to the Italian greeting. His translated message is, “I am not leaving town, and I will see you around.”