Ag Man and Woman of the Year named at annual luncheon 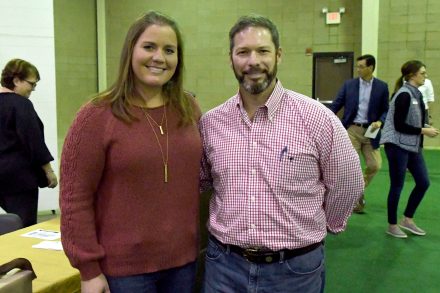 Jan Jones and Rob Cohen were named Ag Woman and Man of the Year Friday at the Ag Appreciation Luncheon.

Rob Cohen was named 2019 Decatur County Ag Man of the Year, Jan Jones was named Ag Woman of the Year and Sen. Dean Burke received the 2019 Ag Influence Award at the Ag Appreciation Luncheon on Friday.

Cohen marks the 30th recipient of the Decatur County Ag Man of the Year Award, and the recognition is well-deserved. He is a member of Georgia Grown, the Georgia Pecan Grower’s Association and the Decatur-Seminole County Development Authority Board. Cohen also holds a seat on the board for the Southeastern Pecan Growers Association. He supports activities with local FFA, 4-H, Grace Christian Academy, and Morningside Baptist Church where he is a member of the finance committee.

Cohen grew up on a pecan orchard. He put himself through college through the scouting business, paying for an education from the University of Georgia through cotton, corn, peanuts and pecans. He earned his bachelors in agriculture and soon became a crop consultant.

After Hurricane Michael, Cohen showed perseverance in his efforts to rebuild his family’s pecan orchards and put the plight of pecans and timber in the local, state and national spotlight.

Jones was raised on her family’s fifth generation farm, feeding cows, picking watermelons and pulling pigweeds. After graduating high school, she left the farm life and pursued a career in education. She graduated from Mercer in 2012 with a degree in English and headed to Charleston, South Carolina, to become a teacher.

Ultimately, though, she returned to her family roots and found her true calling on the family farm.

Jones serves on the Georgia Peanut Commission and the Georgia Young Farmers Committee. She has been on RFD-TV’s show “Farm Her.” She has had publications released in Southern Farm and Garden, Southern Farm Press, Farmers and Consumers Market Bulletin and the National Peanut Board magazine. Jones is a key member of the farm service agency county committee as the woman adviser and Decatur County Farm Bureau Young Farmer chairman.

Sen. Burke, introduced by Tommy Dollar, was called a great friend of agriculture, Southwest Georgia and “to me personally,” said Dollar.

“He thinks about every person in Southwest Georgia from an agricultural, medical and friendship perspective,” said Dollar. “He is always asking what else can be done, and he has been a strong supporter of the Chamber of Commerce and the Ag Committee.”

Burke thanked the room upon receiving the 2019 Ag Influence Award,

“I want to thank everyone in this room that spends time advocating for ag and your community in Atlanta,” said Burke. “Every time I get a chance to do that, I want to thank them.”

In memory of all the ‘Good Guys’