Nobody hurt in Climax house fire, home in ruins 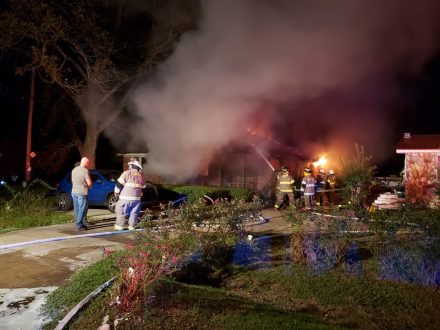 Climax Fire Department along with Decatur County Fire and Rescue responded to a structure fire in Climax Monday night, which left the home in ruins.

Climax Fire Chief, Jeff Kelly said the owner of the home was cooking dinner, when he went to tend to other chores in the home and left the grease on the stove for too long. The grease caught fire and shot up through the attic, causing the front of the home to cave in, the roof to be in ruins and most of the back of the home to be destroyed.

Kelly said when a grease fires take place always call 911 first, so they can be en route, but if the fire is small enough and still contained there are ways to smother it.

He suggests throwing salt or flour or other grain mills to smother the fire or if possible, even a wet towel. However, do not pour water on the fire or try to grab the pot and run out the door with it.

In this case, Kelly said the homeowner was uninjured from the fire, but did have cuts and lacerations from trying to run back inside to grab the keys to his vehicle. He was later taken by EMS to the hospital.

Kelly said the house is a total loss and currently unlivable, but he is glad the homeowner is safe. The homeowner did have a teenage daughter, but Kelly does not believe she was staying there at the time of the fire, so she does have other accommodations available.

Rotary gets a lesson on military intelligence