Bainbridge becomes center of tennis in Georgia for state tournament 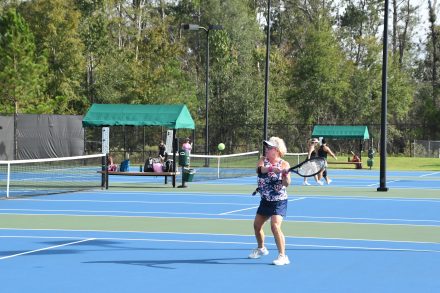 oellyn Lott hits one over the net on Saturday morning for the Bainbridge team at the USTA Southern Doubles State Championship.

The Bainbridge Decatur County Recreation Authority, Bainbridge Tennis Association and City of Bainbridge hosted the USTA Southern Doubles State Championship this past weekend, where they welcomed 27 teams from around the state to compete.

Tennis pro, Tim Thompson said all of the matches were very close.

“Almost every match came down to a deciding tie breaker,” he said. “We would just come up one or two points short.”

Thompson wasn’t disappointed, though. He was happy to see his teams compete. Following the hurricane last year, the teams didn’t get to play in as many competitions as they would’ve liked, so this tournament was refreshing and exciting.

“Our players are pumped for the next tournament,” Thompson said.

The players aren’t the only ones pumped after the weekend; Thompson was thrilled at the turnout of the competition and how everything went off without a hitch.

“It was a great event,” Thompson said. “It was made great by our community, city and Recreation Authority, who got everything in line.”

With the help from everyone, Thompson was able to get all of the facilities in order and taken care of, so when competitors arrived everything was in perfect condition for play.

Restaurants, shops and hotels also contributed to the great event. Thompson said most everywhere offered discounts to the players and it left the players extremely happy.

“It takes everyone welcoming them in,” Thompson said. “They know they’ll be treated special in our community and they’re not just another face.”

Thompson said the players also commented on how nice it was to have planned activities, such as the movie in Willis Park, and he is thankful that the City could coordinate that.

Thompson thinks the USTA will have a difficult time not asking Bainbridge to host again, if it’s up to the players and their feedback.

“I’m just very pleased at how it went off,” Thompson reiterated. “I’m definitely looking forward to hosting another tournament here.”

Bainbridge fighting to win out, claim third in region