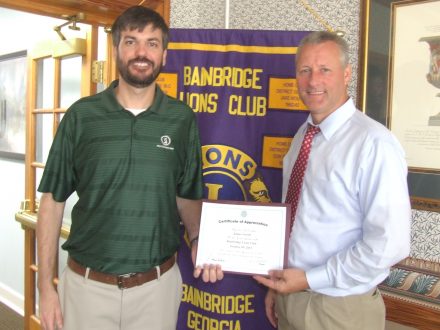 “I have had the honor of leading our band to many top achievements this year,” Sewell said. “I am following in the footsteps of former director Paschal Ward who turned the program into one of the top in Georgia and the south.”

Sewell, who had several of his band officers with him, outlined many of their top achievements this year. “At the recent marching band festival in Rehobeth, Alabama, our Bainbridge High School Band received superior ratings for the 34th consecutive year. They also were awarded the Ronny Walsh Model of Excellence Award.

Sewell further pointed out that the band has participated in the festival for six years where they have been judged on music performance, marching and general effect.   Sewell told the Lions that the Bainbridge High School Band was the only band at the festival to receive the Ronny Walsh Model of Excellence Award which is very prestigious and is given to the band displaying outstanding respect, dignity, character and class both on and off the field.

Sewell told the Lions that the marching band will now turn their sights toward upcoming trips to Washington D.C. New York and Philadelphia in November.

Also at Wednesdays meeting Lions Club president Stephen Whitaker presented a $250 check to Thea Burke of the  Alzheimer’s Association for the October 26 2019 Walk to End Alzheimer’s. Registration will be at 9 a.m., the ceremony will begin at 10 a.m. and the walk will begin at 10:30 a.m.

1 On 1 Mentoring teaches kids on dangers of…