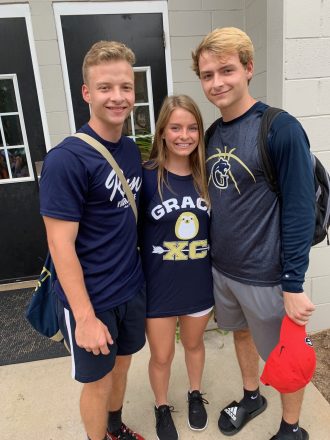 It is a rare event to find a set of triplets in the school, even more so to find all participating in the same sporting events; but the children of Mitch and Vickie Parker of Bainbridge are doing just that.

All three Parker children. Gabe, Seth and sister Dani, are seniors at Grace Academy, where all excel at their chosen sports along with their academics.

Grace students and faculty gave the Boys and Girls Cross-Country teams a big send-off Friday afternoon as they headed to the State competition together.

Although, the boys team went to State last year and won, this is believed to be the first time for any Grace girls to qualify to make the trip. Dani Parker is joined by Callie Widener in the run. Those two qualified independently, explained Elizabeth Simmons, who took on the training program after Dorenda and Richard Cox retired last year. She gives a lot of credit to the preparation they instilled over the years.

“I will tell you at the beginning of the season, knowing what all had been done and what was yet to do, I was very appreciative of the Coxes.”

Simmons was all excited when the team came running out of the gymnasium and  were greeted by the student body in a send-off.

When asked what it takes to qualify for state, she replied, “A lot of grit, hard work, thinking nutrition, strength training and lots of practice.”

She explained that at the beginning of the season when all the team members were gathered together they were asked “Why are you here? Dani said she was there for her brothers, that it was something they could all do together their senior year.

With the Boys, the only reason was to go to state. It became important to get them ready. Then when Greg Carpenter stepped in and took over the boys’ team it was all good,” said Simmons.

Vickie Parker said her children began running when they were only seven years old and began participating in 3 and 5 K runs.

”It really took with Gabe,” she said, and all the encouragement for the other two came from Gabe, adding “We feel it is a God thing that they are all running state tomorrow. Definitely we want to give God the glory.”

Dani is not just a one trick pony. She has joined her brothers in other sports as well, and played volleyball for six years at Grace.

Bainbridge Community Band to begin practice next week for…