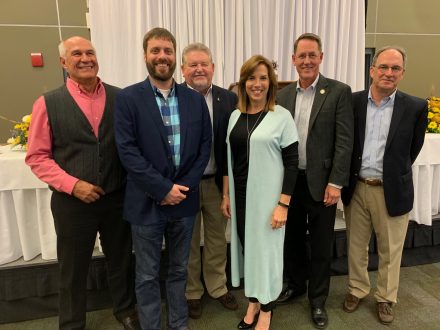 Glennie Bench, as emcee for the evening, began her remarks by painting a mental picture of what a serious, no-nonsense person Dean Burke is.  “He is a serious guy. He has pursued serious careers in serious fields. He has serious hobbies—He’s a serious guy,” she repeated as she pointed out that over the years he has developed the ability to hide his emotions because he was dealing with such serious issues.

Even as she spoke, her husband Steve Bench interrupted and declared, “That is not the Dean Burke I know.” He then proceeded to show a series of “doctored” videos on the screen representing Dean enjoying speedy, dangerous hobbies, such as skate boarding, motorcycle racing, etc. It concluded with a wild photo of a man purported to be Dean Burke, with an immense tattoo on his entire chest, exclaiming that is the reason he never takes his shirt off. At that point Steven proclaimed, “This is the Dean Burke I know.”

The next person up to give his version of Burke was Tommy Dollar, who described himself and his wife as traveling, boating and hunting friends of the Burkes. He congratulated him on being an excellent government representative before commenting on a strange hobby he had of collecting boxes. “He likes boxes, all kinds of boxes.” As he has studied boxes he has become a doctor of boxes exclaimed Dollar.

Ronnie Burke, brother of Dean, introduced a video tape submitted by senate associate Freddie Powell Sims, who began her comments with ‘How do you roast a man who is a Saint?” She continued saying how hard he worked for the people of Southwest Georgia, especially at improving health conditions. Agreeing that he was a quiet man, she added, “When he speaks people listen. He is a quiet storm.”

Brother Ronnie than proceeded to describe several events during their growing up years that illustrated a sibling rivalry between himself and Dean. After the fun, he conceded that he was proud of his brother and playfully urged all to “vote for Glennie’s best friend and Ronnie’s brother.”

There is always a mystery roaster, and this year was no exception. As Burke’s son Will took the stage he began to recall memories from his childhood and the time he realized, “My dad’s a nerd.”

He said he only heard his dad swear one time and related a story of a deer hunting event when Will was 10-12 years old. His father had stressed and reminded the boy that a buck must have four points before he could shoot it. Will saw a deer standing nearby and proceeded to shoot and kill it. His pride was quickly deflated when his father exclaimed, “She’s not much bigger than a dog.” Then, the professional surgeon began to dress the deer with a pocket knife. When the blood and other bodily fluids splashed on his shirt, he pronounced the S word.

Before the Roastee was granted the last word, the Benches spoke of how they had enjoyed a long friendship with the Burkes, and how even though wife Thea didn’t care that much for football, the Burkes had traveled to Penn State to see a game when the Bench’s son was on the team.

“Well this has been fun,” were the opening remarks of Dean Burke.

He commented that he was pleased with the video from his friend Senator Sims, adding that at first she told people he was ‘stuck-up.’ Instead he described himself as an introvert who must have time to build relationships.

He expressed his thanks and love for his family, especially his wife Thea, and the grandchildren, and related a funny story of how he and his wife had spent their honeymoon in a big cabin in the hills on the coldest nights ever. “There was no heat except for a fireplace that didn’t draw well, and a small space heater.” Consequently they spent most of their honeymoon huddled in the bathroom trying to keep warm.

Along with the speakers, there were drawings for several large gift baskets donated for a raffle. Pilot Club President Shea Campbell has confirmed the raffle raised $1,500 for the Cloud Kirbo fund.