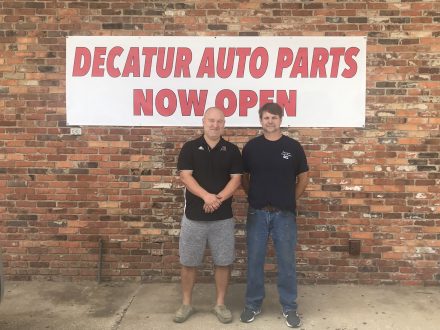 Jason Davis and Jimbo Godwin stand in front of the “Now Open” sign at the new location of Decatur Auto Parts.

Customers and locals alike were devastated when Decatur Auto Parts burned to the ground in July. However, the work to come back and serve the community never ceased. The store, much to the pleasure of customers, has now reopened at the old Henderson’s Grocery with more products than ever and improved parking.

Prior to the fire, former owner, Jimbo Godwin sold the business to Tri-States Automotive Warehouse, who was a long time parts supplier to the business.

Godwin remained at the forefront of the store and works as manager.

Following the fire, Godwin and other employees were gone for three months, but he said they never really closed.

Tri-States Automotive Warehouse had locations in surrounding areas that they moved employees to. Employee Jason Davis worked out of Tallahassee, while Godwin worked in Quincy. During that time, Davis and Godwin still sold parts and would deliver them back to customers in Bainbridge.

Godwin did admit they lost some of their walk-in customers, but since the move they have gained some of those back, along with new faces.

Some of the new customers have bragged on the store’s new parking. They said it is much larger, where they used to be scared to back out at the former location or not have a place to park.

“Although that location was good to us for so many years, getting out was horrible,” Godwin admitted. “This new parking is so much better for everyone.”

The parking is not the only thing that has doubled in size. Due to the fact the new location was a previous grocery store, Decatur Auto Parts now has additional room.

“We have doubled what we had in auto parts before we burned down,” Godwin said proudly.

The main difference in this location is that they will not open back up the machine shop. When Godwin sold the business, he rented the machine shop separately and they have chosen to operate at a different location.

But, Godwin is so thankful to all the returning customers for their support and also all of the customers who supported them while they weren’t open and were operating out of other locations. They know it was not convenient, but truly are so appreciative.