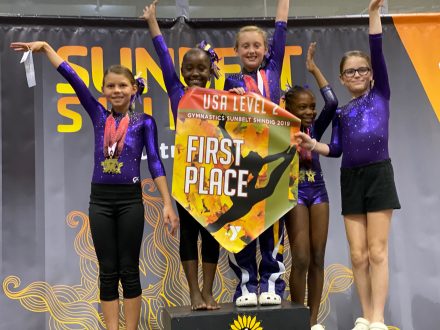 The Bainbridge Gymnast-a-Cats were on the attack at their first meet of the year in Moultrie. Lanie Gay was outstanding in her first ever gymnastic competition, winning first place in all four events (vault, bars, beam, and floor exercise).

Coach Melynda Murkerson said ,“Lanie is very hard working and a perfectionist, which really pays off.”

Coach Melynda Murkerson moved Lanie up to the next level. When a gymnast wins all four events with outstanding scores it is a solid gold performance.

The level one team won first place. There are five girls on the team and it five girls first meet ever! Their all-around scores were, Lanie Gay 37.7, Cadee Sammons 36.075, Janiyah Scott 34.725, and Kalli Wolford 36.525. Taking home twenty-five metals and a first place Team Award, coach Murkerson said she was blown away with their performance.

Dhara Patel competed in the platinum level and placed first on all five events.

Coach Murkerson said they had a very successful meet.