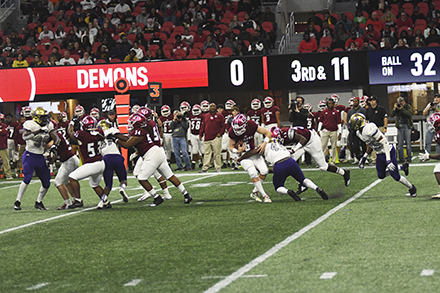 Bainbridge has had Friday’s game circled on its calendar since the beginning of the season.

Warner Robins has had it circled on its calendar since last December.

The Bearcats and the Demons will meet for the first time since the Class AAAAA State Championship game at Centennial Field this Friday. On Dec. 11, 2018, Bainbridge beat Warner Robins 47-41 in triple overtime, denying the Demons their second straight attempt at a state title.

To say Warner Robins (7-1, 2-0 Region) has a chip on its shoulder is an understatement.

“If you can’t get up for the Warner Robins game, then you just can’t get up,” said Coach Jeff Littleton. “This is just about as big as it is.”

Bainbridge (5-2, 0-1 Region) is trying to put back-to-back losses—the first against Tift County on Oct. 4 and the second against Veterans in the region opener two weeks ago—behind it. The Bearcats took a bye last week as a chance to work on the mistakes they made in those two games, as well as recharge and refresh before the bulk of the region schedule.

Five of Bainbridge’s seven games played so far have come down to the fourth quarter. According to Littleton, many of Warner Robins’ games haven’t. To him, that’s an advantage.

“Our challenge is going to be to play with the intensity that they’re going to bring, because they lost two state championships in a row, and one of them was to us,” said Littleton. “They are going to be at their best, so we are going to have to be at our best.”

Warner Robins’ first year coach Marquis Westbrook has led the Demons to a 7-1 start, their one loss handed to them from the Colquitt County Packers (7-1). In addition to Westbrook, dual threat quarterback Jalen Addie has stepped in to replace Dylan Fromm from last year’s team. He leads the Demons with 16 passing touchdowns and two rushing touchdowns.

“They are the three that run the offense,” said Littleton about Addie, Rutherford and Jones.

On defense, middle linebacker Demarcus Robinson leads the team with 13 tackles. Linebacker Ahmad Walker is also an aggressive football player who is making a name for himself, said Littleton.

“We have to execute on both sides of the ball,” said Littleton. “If we don’t do that we don’t stand a chance. We have to take care of the football and make some explosive plays. If we do that, I feel really, really confident about the game.”

Bainbridge will kick off against the Demons at Centennial Field on Friday at 7:30 p.m.