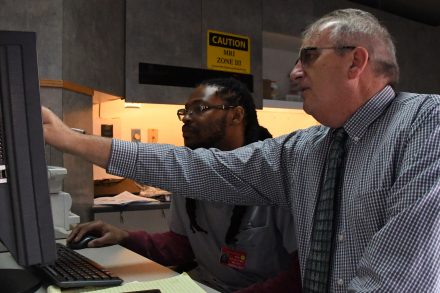 George Johnstone (right), a clinical applications specialist with Canon Medical Systems, works through the ins and outs of the new MRI equipment at Memorial Hospital and Manor.

Bainbridge Memorial Hospital and Manor is up and running with new Magnetic Resonance Imaging (MRI) equipment that will provide improved services to patients visiting the hospital’s radiology center.

There are several features to the MRI equipment that are an improvement over old machines, including more technological options for doctors, a quieter scan experience and the option to go feet-first into the machine.

Often, patients are nervous to be given an MRI scan because of the claustrophobic nature of the equipment—that is, being put inside what is essentially a tube where they are unable to move for the duration of the procedure. The hospital’s new MRI machine, made by Canon Medical Systems, works around those problems by allowing a patient’s head all the way up to their entire upper body be outside of the machine, depending on what is being scanned.

“It doesn’t feel like you’re in a tunnel or a tube or a coffin,” said Jamie Whitaker, radiology manager. “There’s something that gets inside people’s heads. But if their head is hanging out the other end of the machine, it’s a whole lot more tolerable.”

According to Lee Harris, scans from a patient’s pelvis and down allow for feet-first entry into the MRI. Scan of a patient’s back allow their head to be outside the machine.

The issue of a loud banging noise heard throughout an MRI scan is also a major improvement from previous MRI equipment.

To address the issue of noise, engineers took several steps to minimize sound levels as part of Canon’s Pianissimo noise-reduction technology. Pianissimo provides a vacuum chamber that surrounds the gradient coil and the mounting support of the chamber and gradient coil is separated from the magnet, according to Canon. Additionally, acoustic insulation dampens any mechanical energy from the vacuum chamber. Innovative sequences also help to reduce the originating noise of the gradient coil. The result is EPI sequences with sound levels similar to that of a noisy street.

Nicholas Andrews, a Memorial Hospital employee who was being trained on the new equipment, was pleased with the interface as he worked on a patient this week.

“There’s a lot more leeway as far as the technology and the controls, instead of just being stuck on one platform,” said Andrews. “You have a lot more items.”