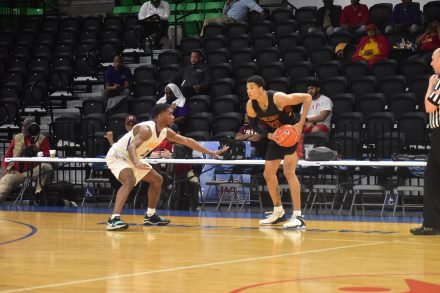 Myles Thomas can be seen with the ball at one of the Tuskegee Basketball games.

Thomas of Tuskegee has been voted on the 2019-20 Southern Intercollegiate Athletic Conference (SIAC) Preseason Basketball Team as announced Wednesday by the league office. He earned first team honors with votes and the predicted order of finish being selected by the league’s head coaches and sports information directors.

Thomas played and started in all 28 games last as a junior and averaged 13.1 points per game to lead the team in scoring. He was also ranked inside the top 15 among players in the conference….16 times last season Thomas scored in double figures including a stretch of five in a row….Scored a season-high 24 points twice against Valdosta State and Central State. The Bainbridge, Ga. native also led the team in rebounds at 6.0 per outing. Thomas was also a threat from three point range having 13 games in which he made more than two threes from beyond the arc. Six times he made four or more.