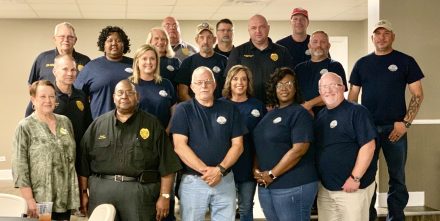 Thursday night, October 10th, Bainbridge Public Safety celebrated the successful completion of the 2019 Citizens Academy.  Bainbridge Public Safety officers who led weekly sessions were joined by Academy participants and their guests for a delicious meal at the Joe Sweet Community Center on Potter Street.  Following the meal, each Academy participant took a moment to share their individual experiences with the group.  Participants seemed to especially enjoy ride-alongs with officers, as well as learning about traffic stops, active shooter, and “shoot/don’t shoot” situations.

Public Safety Director Jerry Carter thanked everyone for participating in this year’s Academy, and encouraged Academy participants to share their positive experiences with their friends and family members so they will want to participate in next year’s Academy.  Carter also expressed his appreciation to Councilwoman Roslyn Palmer, who was in attendance at the ceremony, for her unwavering support of the Public Safety Department and its Officers.

During the 2019 Bainbridge Public Safety Citizens Academy, participants gathered together on Thursday nights for 5 weeks.  They were given a close-up look as to how the police, fire, and investigation units function, and actually took part in activities as if they were a sworn officer including: Drug enforcement, officer safety defensive tactics, investigations, evidence processing, use of force, TASER technology, firearms safety and shooting techniques, traffic stops, fire safety, and DUI enforcement.

The date for the 2020 Bainbridge Public Safety Citizens Academy has not been set but anyone interested in placing their name on a waiting list can contact Julie Harris by calling 229-400-9177 or email julieh@bainbridgecity.com.

Decorate and display a scarecrow for new Kiwanis Club…