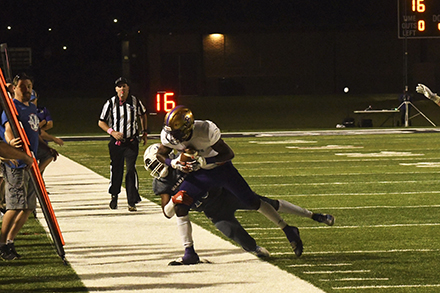 Bainbridge’s 1-minute drill at the end of Friday night’s game against Veterans (6-1, 1-0 Region 1-AAAAA) ended with an incomplete pass that should have left 2 seconds on the clock. Instead, the clock continued to run and the Bearcats took their second straight loss 16-13.

Quayde Hawkins threw a pass to Deyon Bouie in the middle of the end zone that fell incomplete with 2 seconds left. Officials did not make a call for time to be put back on the clock and rushed off the field together as Bainbridge coaches and players were left demanding there be time for Bainbridge to get one more play off.

“We all thought there were 2 seconds left in the game, but apparently the officials didn’t, so there’s nothing we can do about that,” said coach Jeff Littleton.

Bainbridge (5-2, 0-1 Region 1-AAAAA) had marched to Veterans’s 7-yard line. The Bearcats started with 58 seconds left in the game on their own 31-yard line. Hawkins connected with multiple receivers to whittle through the Warhawks defense with pass after pass to the outside edges of the field.

The Bearcats led for the majority of the game until Veterans scored on a 12-yard run with around 9 minutes left in the game to take a 16-13 lead. Bainbridge’s defense got a huge 3-and-out on Veterans’s final position to give themselves a chance to tie or win.

“We made some mistakes early, but the thing is we gave ourselves a chance, we just came up a little short,” said Littleton. “What we have to do now is go back and go to work and not make an excuse of why we lost the game.”

Bainbridge held Veterans to only 47 passing yards, but the Warhawks put up 221 yards on the ground.

The Warhawks got on the scoreboard with less than a minute to go in the first quarter, hitting a 40-yard field goal to take a 3-0 lead.

On Veterans’s next field goal attempt with 8:07 left in the second quarter, Tahari Tate got a hand on the ball for a block that sent the ball bouncing to the side, where Zion Bouie snatched it out of the air and dashed back the other way for his second scoop and score in two games.

Bainbridge held its lead after forcing Veterans to kick another field goal with 4:37 left in the second quarter. The Warhawks missed a field goal as time expired in the first half with Bainbridge still up 7-6.

Rashad Broadnax took Bainbridge to Veterans’s 4-yard line after a big 63-yard run, then punched into the end zone on a 2-yard run to the outside that cushioned Bainbridge’s lead even more at 13-6. Broadnax finished the night with 13 carries for 94 yards.

Veterans hit its third field goal of the night with under two minutes to go in the third quarter to come within a touchdown of taking the lead.

Bainbridge will have a bye next week and host Warner Robins at Centennial Field on Friday, Oct. 25, for Homecoming. Kickoff is at 7:30 p.m.